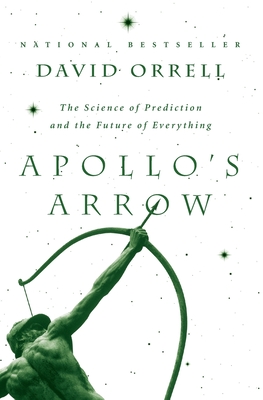 From seers to scientists, mystics to meteorologists, there have always been peoplewho claim to know what will happen in the future. The Oracle at Delphi, Pythagoras, Newton and the stock analyst on a business report have all endeavoured to look forward in time. But even with recent technological advances and the help of computers and satellites, are we any better at predicting the future now than we were in the distant past? How can scientists claim to foresee future climate events when even three-day forecasts prove a serious challenge?

In Apollo’s Arrow, David Orrell looks at the history of prognostication to show how scientists (and charlatans) have tried to forecast the future. He then breaks down the mathematics of what really goes into apredictive model. Orrell has created a compelling, elegantly written history of our future that addresses some of the most important issues of our time.

, received his doctorate in mathematics from the University of Oxford. His work in the prediction of complex systems has been featured in New Scientist and the Financial Times, and on BBC Radio, ABC Radio (Australia) and NPR. His theory that errors in weather forecasts are due not to chaos (the “butterfly effect”) but to model error stirred up a storm of debate in meteorological circles. He now conducts research in the area of systems biology. He lives in Vancouver, British Columbia. Visit the author online at www.apollosarrow.ca.