Elephant in the Garden (Paperback) 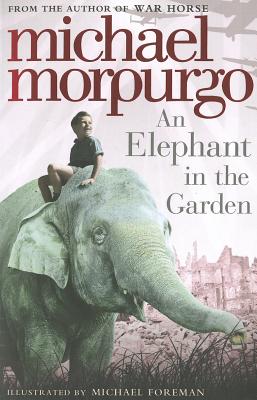 By Michael Morpurgo
$16.00
Email or call for price.

“Confined to her nursing home bed, 82-year-old Lizzie tells an outrageous but true story to Karl and his mother. While awaiting the return of Papi from World War II, 16-year-old Lizzie, her young brother, Karli, and her mother make their garden home to a four-year-old orphaned elephant from the zoo. Dresden, Germany, is sure to be bombed, and the zoo will be forced to kill the larger animals that may pose a threat to the city. Marlene, the adored elephant, breaks loose, beginning a chase that leads them away from Dresden and saves them from warfare. Lizzie's story is laced with details that bring history to life.”
— Jane Morck, Third Place Books, Lake Forest Park, WA

Lizzie and Karl's mother is a zoo keeper; the family has become attached to an orphaned elephant named Marlene, who will be destroyed as a precautionary measure so she and the other animals don't run wild should the zoo be hit by bombs. The family persuades the zoo director to let Marlene stay in their garden instead. When the city is bombed, the family flees with thousands of others, but how can they walk the same route when they have an elephant in tow, and keep themselves safe? Along the way, they meet Peter, a Canadian navigator who risks his own capture to save the family.
As Michael Morpurgo writes in an author's note, " An Elephant in the Garden" is inspired by historical truths, and by his admiration for elephants, "the noblest and wisest and most sensitive of all creatures." Here is a story that brings together an unlikely group of survivors whose faith in kindness and love proves the best weapon of all.