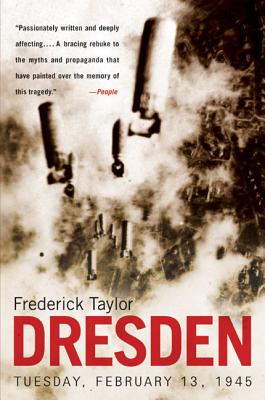 For decades it has been assumed that the Allied bombing of Dresden was militarily unjustifiable, an act of rage and retribution for Germany’s ceaseless bombing of London and other parts of England.

In Dresden, Frederick Taylor’s groundbreaking research offers a completely new examination of the facts, and reveals that Dresden was a highly-militarized city actively involved in the production of military armaments and communications concealed beneath the cultural elegance for which the city was famous. Incorporating first-hand accounts, contemporaneous press material and memoirs, and never-before-seen government records, Taylor documents unequivocally the very real military threat Dresden posed, and thus altering forever our view of that attack.

Frederick Taylor studied history and modern languages at Oxford University and Sussex University. A Volkswagen Studentship award enabled him to research and travel widely in both parts of divided Germany at the height of the Cold War. Taylor is the author of Dresden and has edited and translated a number of works from German, including The Goebbels Diaries, 1939-1941. He is married with three children and lives in Cornwall, England.

“Deeply affecting ... a bracing rebuke to the myths and propaganda that have painted over the memory of this tragedy.” — People

“The enigmatic past and the patient muse of history are brilliantly served ... by this blockbuster of a book.” — Chicago Sun-Times

“Fascinating....a fine, revealing work of revisionist history. He has also given us a deeply haunting human drama.” — Houston Chronicle

“Compelling ... [Taylor] puts the assault in its proper context to reveal the inherent moral tangle of total war.” — Atlantic Monthly

“Compelling ... Mr. Taylor makes a persuasive case that Dresden was not an innocent bystander in the tragedy that was WWII.” — Washington Times

“A major contribution to the story of Dresden.” — Christian Science Monitor

“Genius...an absolutely magnificent work both of scholarship and of narration.” — The Literary Review (London)

“[An] authoritative and moving account …. Impeccably documented.” — The Independent (London)

“In narrative power and persuasion, [Taylor] has paralleled in DRESDEN what Antony Beevor achieved in STALINGRAD.” — Nicholas Fearn, The Independent on Sunday (London)

“I thought I knew what happened at Dresden on that fiery day in 1945 -- and then I read this book.” — James Bradley

“A provocative re-examination of the bombing of Dresden ... elgantly written and deeply moving.” — Peter Duffy, author of The Bielski Brothers