Our Town: A Play in Three Acts (Paperback) 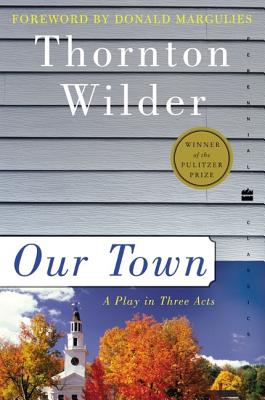 “[Our Town] leaves us with a sense of blessing, and the unspoken but palpable command to achieve gratitude in what remains of our days on earth.”— New Yorker

Thornton Wilder’s Pulitzer Prize-winning drama of life in the mythical village of Grover’s Corners, New Hampshire—an allegorical representation of all life—is an American classic. It is the simple story of a love affair that asks timeless questions about the meaning of love, life, and death.

Our Town explores the relationship between two young neighbors, George Gibbs and Emily Webb, whose childhood friendship blossoms into romance, and then culminates in marriage. When Emily loses her life in childbirth, the circle of life portrayed in each of the three acts—childhood, adulthood, and death—is fully realized.

Often considered one of the greatest American plays of all time, Our Town is also Wilder's most frequently staged play. It debuted on Broadway in 1938 and continues to be performed daily on stages all around the world.

Thornton Wilder (1897-1975) was an accomplished novelist and playwright whose works, exploring the connection between the commonplace and cosmic dimensions of human experience, continue to be read and produced around the world. His Bridge of San Luis Rey, one of seven novels, won the Pulitzer Prize in 1928, as did two of his four full-length dramas, Our Town (1938) and The Skin of Our Teeth (1943). Wilder's The Matchmaker was adapted as the musical Hello, Dolly!. He also enjoyed enormous success with many other forms of the written and spoken word, among them teaching, acting, the opera, and films. (His screenplay for Hitchcock's Shadow of Doubt [1943] remains a classic psycho-thriller to this day.) Wilder's many honors include the Gold Medal for Fiction from the American Academy of Arts and Letters, the Presidential Medal of Freedom, and the National Book Committee's Medal for Literature.

“Taking as his material three periods in the history of a placid New Hampshire town, Mr. Wilder has transmuted the simple events of human life into universal reverie. He has given familiar facts a deeply moving, philosophical perspective....Our Town is one of the finest achievements of the current stage.”
— Brooks Atkinson

“Its astringent distillation of life and death in the fictional early-20th-century town of Grover’s Corners, N.H., is desperately needed...so Americans can remember who we are. . . . The true American faith endures in “Our Town.”
— Frank Rich, New York Times

“Wilder’s unfashionable insistence on embracing wonders as well as woe is both gallant and exhilarating. . . .[Our Town] leaves us with a sense of blessing, and the unspoken but palpable command to achieve gratitude in what remains of our days on earth”
— The New Yorker