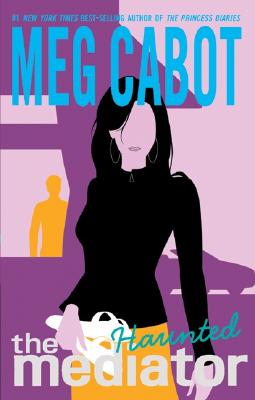 This is book number 5 in the Mediator series.

Haunted is the fifth book in the thrilling, romantic Mediator series, from the New York Times bestselling author of the Princess Diaries, Meg Cabot.

Suze is used to trouble, but this time she's in deep: Ghostly Jesse has her heart, but Paul Slater, a real flesh-and-blood guy, is warm for her form. And mediator Paul knows how to send Jesse to the Great Beyond. For good.

Paul claims he won't do anything to Jesse as long as Suze will go out with him. Fearing she'll lose Jesse forever, Suze agrees. But even if Suze can get Jesse to admit his true feelings for her, what kind of future can she have with a guy who's already dead?