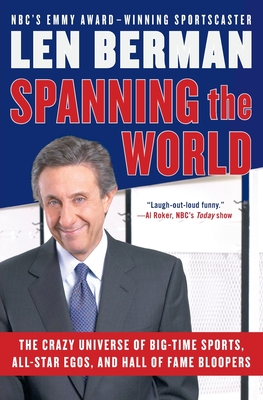 Go Spanning the World with Len Berman in this wildly entertaining, insightful, and often hilarious book that takes sports fans behind the scenes and inside locker rooms.

One of the most popular television sports personalities—known for his "Spanning the World" segments on NBC's Today show—Len Berman delivers his unique view of the world of sports, from the bizarre to the historic, all with his characteristic wit.

Over the years sports and sports reporting have changed, but Spanning the World puts it all in perspective in this irreverent take on the heroes and iconic moments.

Berman guides us through the world he knows like no one else, from intimate recollections of his heroes to postgame celebrations, exhibiting the most hilarious and shocking moments from the whole cast of characters from the last decades in sports: John McEnroe, Muhammad Ali, Larry Bird, Derek Jeter, and many more. He also addresses the more serious issues facing sports today, including steroids, overpaid stars, athletes and violence, and the place of sports in society.

A must read for every sports fan, Spanning the World is an irresistible blend of humor, history, and contemporary commentary on the state of sports from the ultimate fan who has seen it all.

Len Berman is the weekday sports anchor at WNBC New York, and the host of the popular "Spanning the World" segments on NBC's Today show. He has won six local Emmy Awards and has been voted New York Sportscaster of the Year five times by his peers in the National Sportscasters and Sportswriters Association.