My Weird School #10: Mr. Docker Is off His Rocker! (Paperback) 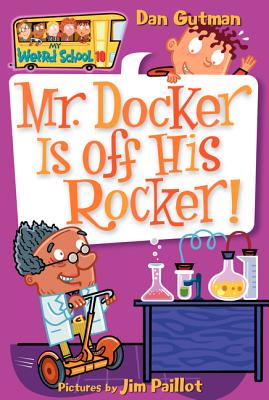 This is book number 10 in the My Weird School series.

With more than 12 million books sold, the My Weird School series really gets kids reading!

In this tenth book in the bestselling My Weird School series, A.J. and his friends at Ella Mentry School are getting a new science teacher! His name is Mr. Docker, and he’s clearly a mad scientist. He does nutty experiments and has a demented, cackling laugh. Plus, he invented a car that runs on potatoes! Something weird is going on. Is Mr. Docker trying to take over the world?

Perfect for reluctant readers and word lovers alike, Dan Gutman’s hugely popular My Weird School chapter book series has something for everyone. Don’t miss the hilarious adventures of A.J. and the gang!