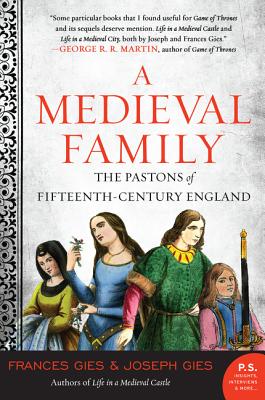 The fascinating story of the fortunes of one medieval family over the course of a century, from bestselling historians Frances and Joseph Gies

The Pastons were members of the English gentry—a tiny group of roughly 1,000 households sandwiched between the ruling nobility and the peasants, and a rough analog for the contemporary “middle class.” Their existence was fairly typical, but for the fact that it was recorded in an extraordinary collection of nearly 1,000 letters which have survived to this day. Through these letters, which cover the years from 1421 to 1484, and the lives of three generations of Pastons, bestselling historians Frances and Joseph Gies provide a rare window into the day-to-day life of this family, and the broader political and social goings-on of medieval England.

A Medieval Family first tells the story of Judge William Paston (1378-1444), the patriarch of the family, a lawyer and judge who bought up land in Norfolk and left his son a sizeable estate, which was later forcibly seized by a neighboring baron. We then follow the family through its ups and downs over several generations, learning of their feuds with neighbors, the frequent instability of 15th century England, and significant historical events, such as the Siege of Caister and the Battle of Barnet. There are also many letters of more personal significance, including a series of Valentines sent to John Paston III.

The work of acclaimed historians Frances and Joseph Gies has been used by George R.R. Martin in his research for Game of Thrones. In A Medieval Family, they have woven a compelling intergenerational saga that is essential reading for anyone seeking insight into the medieval period.

“The Gieses, who specialize in making the Middle Ages accessible to nonspecialists, have done a wonderful job of linking and amplifying the Pastons’ words.”–New Yorker

Frances (1915–2013) and Joseph (1916–2006) Gies were the world’s bestselling historians of medieval Europe. Together and separately, they wrote more than twenty books, which col-lectively have sold more than a million copies. They lived in Michigan.

Frances (1915–2013) and Joseph (1916–2006) Gies were the world’s bestselling historians of medieval Europe. Together and separately, they wrote more than twenty books, which col-lectively have sold more than a million copies. They lived in Michigan.