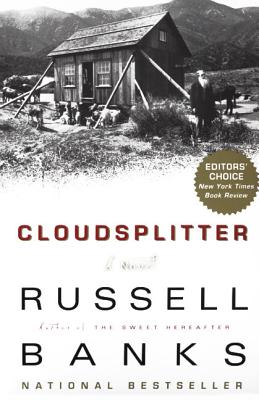 "Deeply affecting. . . . Like the best novels of Nadine Gordimer, it makes us appreciate the dynamic between the personal and the political, the public and the private, and the costs and causes of radical belief." — New York Times

A triumph of the imagination and a masterpiece of modern storytelling, Cloudsplitter is narrated by the enigmatic Owen Brown, last surviving son of America's most famous and still controversial political terrorist and martyr, John Brown.

Deeply researched, brilliantly plotted, and peopled with a cast of unforgettable characters both historical and wholly invented, Cloudsplitter is dazzling in its re-creation of the political and social landscape of our history during the years before the Civil War, when slavery was tearing the country apart. But within this broader scope, Russell Banks has given us a riveting, suspenseful, heartbreaking narrative filled with intimate scenes of domestic life, of violence and action in battle, of romance and familial life and death that make the reader feel in astonishing ways what it is like to be alive in that time.

Russell Banks, twice a finalist for the Pulitzer Prize, was one of America’s most prestigious fiction writers, a past president of the International Parliament of Writers, and a member of the American Academy of Arts and Letters. His work has been translated into twenty languages and he received numerous prizes and awards, including the Common Wealth Award for Literature. He died in January 2023 at the age of eighty-two.

"It is surely his best novel, a furious, sprawling drama that commands attention like thunder heard from just over the horizon." — Time

"Deeply affecting...Like the best novels of Nadine Gordimer, it makes us appreciate the dynamic between the personal and the political, the public and the private, and the costs and causes of radical belief." — New York Times

"Russell Banks's remarkable Cloudsplitter brings Brown back to life, not to teach history, but as the narrator of a morally questioning novel about fathers and sons and fanaticism and how madness is measured when the sane have fled." — USA Today

"Like our living literary giants Toni Morrison and Thomas Pynchon, Russell Banks is a great writer wrestling with the hidden secrets and explosive realities of this country." — Cornel West

"Of the many writers working in the great tradition today, one of the best is Russell Banks." — New York Times Book Review

"Russell Banks is a writer of extraordinary power." — Boston Globe

"Russell Banks's work presents without falsehood and with a tough affection the uncompromising moral voice of our time. You find the craziness of false dreams, the political inequalities, and somehow the sliver of redemption. I trust his portrait of America more than any other—the burden of it, the need for it, the hell of it." — Michael Ondaatje