Country Matters: The Pleasures and Tribulations of Moving from a Big City to an Old Country Farmhouse (Paperback) 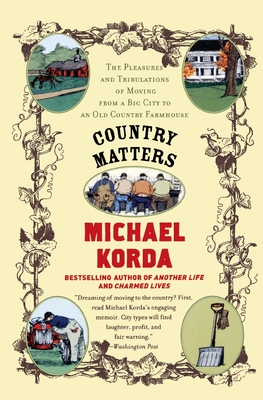 With his inimitable sense of humor and storytelling talent, New York Times bestselling author Michael Korda brings us this charming, hilarious, self-deprecating memoir of a city couple's new life in the country.

At once entertaining, canny, and moving, Country Matters does for Dutchess County, New York, what Under the Tuscan Sun did for Tuscany. This witty memoir, replete with Korda's own line drawings, reads like a novel, as it chronicles the author's transformation from city slicker to full-time country gentleman, complete with tractors, horses, and a leaking roof.

When he decides to take up residence in an eighteenth-century farmhouse in Dutchess County, ninety miles north of New York City, Korda discovers what country life is really like:

The locals are not particularly quick to accept these outsiders, and the couple's earliest interactions with their new neighbors provide constant entertainment, particularly when the Kordas discover that hunting season is a year-round event—right on their own land! From their closest neighbors, mostly dairy farmers, to their unforgettable caretaker Harold Roe—whose motto regarding the local flora is "Whack it all back! "—the residents of Pleasant Valley eventually come to realize that the Kordas are more than mere weekenders.

Sure to have readers in stitches, this is a book that has universal appeal for all who have ever dreamed of owning that perfect little place to escape to up in the country, or, more boldly, have done it.

Michael Korda is the author of Ulysses S. Grant, Ike, Hero, and Charmed Lives. Educated at Le Rosey in Switzerland and at Magdalen College, Oxford, he served in the Royal Air Force. He took part in the Hungarian Revolution of 1956 and on its fiftieth anniversary was awarded the Order of Merit of the People's Republic of Hungary. He and his wife, Margaret, make their home in Dutchess County, New York.

"The New York population growth will certainly diminish after Michael Korda's new book appears in bookstores. But despite the love hate transplanted New Yorkers feel for the countryside, after a short time love wins out. [Country Matters] will become a much loved American classic for everyone." — Bill Blass, designer

"Why travel to Provence when smart pigs and charming eccentrics abound right here in rural America? Michael Korda, that sly anthropologist, serves up the humor and the humanity he's found living in the country, and reveals himself and his Margaret to be charming eccentrics themselves (not that that's news to his friends.)" — Richard Rhodes

"Korda addresses a hackneyed theme and gives it a fresh flip. His nostalgia and affection for country life make his reminiscence a pleasure to read." — Richmond Times-Dispatch

“Brilliantly mapping the territory between fantasy and reality, Michael Korda’s hiliariously funny book is a guide to everything from weighing a pig and mollifying a plumber to dealing with unpredictable weather and breathtaking, surprising beauty.” — Susan Cheever, author of AS GOOD AS I COULD BE