Tony Hillerman's Landscape: On the Road with Chee and Leaphorn (Hardcover) 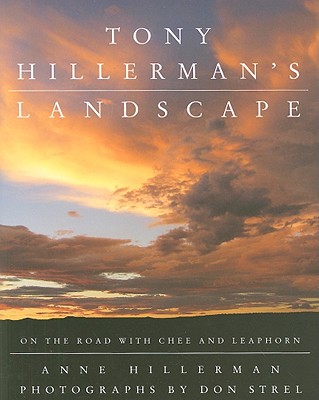 Step into the world of bestselling author Tony Hillerman’s novels with Tony Hillerman’s Landscape: On the Road with Chee and Leaphorn, a stunning collection of original documentary photographs of the New Mexico and Arizona landscapes that were integral to his detective novels. Narrated by his daughter, Anne Hillerman, with original photos from Don Strel, Tony Hillerman’s Landscape is a timely showcase of a hauntingly beautiful region that captured one man’s imagination for a lifetime, and is a daughter’s loving tribute to her father.

Anne Hillerman grew up with the stories her father, New York Times bestselling author Tony Hillerman, brought home from his work as a journalist and later as a fiction writer. His storytelling and a deep love of reading inspired by both her parents led Anne to own career as a journalist and nonfiction writer. After Tony’s death in 2008, Anne felt the loss of his beloved characters as deeply as his fans did. His fans’ passion for those stories inspired her to give Tony’s characters a second chance at life and to develop one of his minor characters, Bernie Manuelito, into a central protagonist. Stargazer is her sixth novel and the twenty-fourth in the Leaphorn, Chee & Manuelito series."

“The honest, unvarnished landscape of the Four Corners region of New Mexico, Arizona, Utah and Colorado was essential to the plots and atmosphere of Hillerman’s books; he knew and loved it well. . . . Though no photograph can fully capture the immensity of that Southwestern sky, many of Strel’s come close. For Hillerman fans, this volume is a must-have.”
— Publishers Weekly

“A multilayered odyssey . . . Tony Hillerman’s Landscape is an alluring and assiduously researched travel memoir, and a revealing behind-the-scenes chronicle of the peoples and settings that inspired Hillerman’s atmospheric mysteries. It’s a must-have for fans of Southwest mysteries and devotees of Indian Country.”
— New Mexico Magazine

“You’ve read the books, now see the land. . . . It’s like having Tony Hillerman still with us.”
— Denver Post