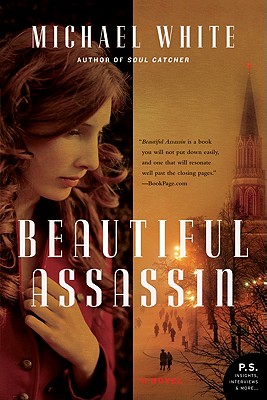 Tat’yana Levchenko is not just any sniper in the Soviet army during World War II she is the best sniper. Her story is one of a mother’s love and the struggle to find someone to love. She champions women’s equality and shows the world the strength of Russian women. Tat’yana befriends Eleanor Roosevelt, but becomes embroiled in a Soviet plot to blackmail the first lady. Michael White paints a picture of a woman recovering from loss, finding love and escaping the forces around her that are out of control; her story is heart wrenching at times, but inspiring for what one woman can do.

“It is rare to find a work of historical fiction that can so intricately weave fact and fiction into a fantastic story. We follow Soviet sniper Tatyana Levchenko from the Eastern Front of World War II to the United States as she tours with Eleanor Roosevelt, embarking on a journey of mystery and intrigue and revealing the shaky alliance between the Soviet Union and the United States.”
— Zachary Schwarz, The Doylestown Bookshop, Doylestown, PA

A breathtaking tale of love, loyalty, and intrigue set in the early days of World War II from the acclaimed author of Soul Catcher

World War II seems lost for the beleaguered Soviets as they struggle to hold back the rising German tide at Sevastopol. But a fearless female sniper inspires hope during her nation's darkest hour. Word of the extraordinary Soviet heroine, Tat'yana Levchenko, reaches American First Lady Eleanor Roosevelt, who invites the beautiful assassin to tour the United States with her. For the Russians, Tat'yana's visit is an opportunity to gain support and valuable U.S. intelligence. But Tat'yana knows she is a pawn in a deadly game of treachery and deceit, forced to question the motivations of everyone around her . . . even the dashing and sympathetic American captain assigned as her translator. And then, as suddenly as she rose to international fame, Tat'yana vanishes without a trace.

Her strange disappearance will remain a mystery for decades—until a determined journalist stumbles across Tat'yana's story . . . and uncovers the astonishing truth.

Michael White's previous novels include the New York Times Notable Book A Brother's Blood as well as The Garden of Martyrs and Soul Catcher, both Connecticut Book of the Year finalists. He is the director of Fairfield University's MFA program in creative writing, and lives in Connecticut.