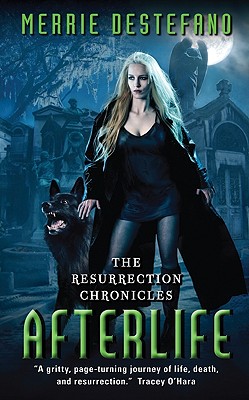 “A haunting story that seamlessly blends the hard-boiled twists of cyberpunk with the noir flavor of a Southern Gothic thriller. Gritty and compelling….Truly high octane stuff.”
—Marc Giller, author of Hammerjack

Bladerunner meets Jim Butcher in Afterlife, a thrilling urban fantasy noir adventure set in an alternate world where everyone gets nine lives. In the vein of J. D. Robb’s bestselling ‘In Death’ series, author Merrie Destefano blends a futuristic concept with gritty noir mystery for a riveting story of murder, conspiracy, and multiple-resurrections that will appeal equally to fantasy, science fiction, and mystery fans. Even paranormal romance lovers will find something to love in Destefano’s extraordinary Afterlife.

Merrie Destefano left a 9-to-5 desk job as a magazine editor to become a full-time novelist and freelance editor. With twenty years' experience in publishing, her background includes editor of Victorian Homes magazine and founding editor of Cottages & Bungalows magazine. She lives in Southern California with her husband, their two German shepherds, and a Siamese cat.

“The fast pacing and skillfully eked out clues keep things moving, for a good read - and a strong first novel.” — Locus

“AFTERLIFE is a seamless combination of hard-boiled mystery, science-fiction exploration of a future based on cloned existence after death, and a fantasy struggle for the survival of good in an evil world. Merrie Destefano has made a fine start on a promising career.” — James Gunn, Science fiction Grand Master

“AFTERLIFE is like smoke in the darkness – intriguing and illusive. Merrie Destefano led me on a gritty page-turning journey of life, death and resurrection. I was riveted from the first page to the last and personally can’t wait for her next one.” — Tracey O'Hara

“Merrie Destefano storms the world of urban fantasy with AFTERLIFE, breathing new life into the vast genre of the undead. Gritty, poignant, in the tradition of Bladerunner with the nostalgia of New Orleans.” — Tosca Lee, author of Havah and Demon: A Memoir