The End of Anger: A New Generation's Take on Race and Rage (Paperback) 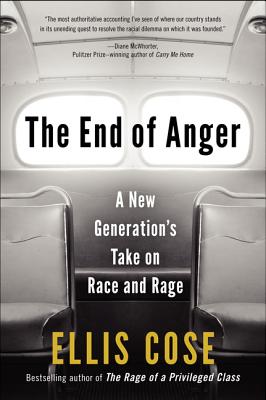 “The most authoritative accounting I’ve seen of where our country stands in its unending quest to resolve the racial dilemma on which it was founded.”
—Diane McWhorter, Pulitzer Prize-winning author of Carry Me Home

“The End of Anger may be the defining work on America’s new racial dynamics.”
—Anthony D. Romero, Executive Director of the American Civil Liberties Union

Ellis Cose is a venerated voice on American life. With The End of Anger, he offers readers a sharp and insightful contemporary look at the decline of black rage, the demise of white guilt, and the intergenerational shifts in how blacks and whites view and interact with each other. A new generation’s take on race and rage, The End of Anger may be the most important book dealing with race to be published in the last several decades.

Ellis Cose is the author of several books, including the bestselling The Rage of a Privileged Class. A former contributing editor for Newsweek magazine, his writing has appeared in the Chicago Sun-Times, Time magazine, USA Today, the Washington Post, and the New York Daily News, among other publications.

“A fascinating read. . . . The End of Anger is a worthy look at where we are and where we’re headed.”
— Philadelphia City Paper

“Cose expertly interweaves his own research into the opinions of others, creating an intriguing dialogue about the future of America as class becomes king.”
— Ebony

“[A book] that will undoubtedly fuel much debate for years to come.”
— Daily News

“Provocative. . . . You never forget the first or second time you read Ellis Cose’s The Rage of a Privileged Class. . . . Look for even more robust conversation [with] The End of Anger.
— Essence

“[A] refreshing, readable, and comprehensive look at race in 21st-century America.”
— Publishers Weekly

“[Cose] illuminates the contemporary racial landscape while avoiding the illusion of a post-racial era and the romance of a static racial condition. This is engaged social history and critical analysis at its best!”
— Michael Eric Dyson, author of Presidential Race

“The most authoritative accounting I’ve seen of where our country stands in its unending quest to resolve the racial dilemma on which it was founded. . . . [Cose’s] new book is a moving, sometimes startling, appraisal of this pivotal moment in our history.”
— Diane McWhorter, Pulitzer Prize-winning author of Carry Me Home

“A masterpiece in illuminating one of the most significant issues in the history of our republic. . . . It is one of those books every American of conscience should read.”
— Robert M. Morgenthau, former district attorney of New York County

“The End of Anger may be the defining work on America’s new racial dynamics. Deeply researched, artfully reasoned, and beautifully written. . . . Cose deepens our understanding not just of race but of the power of generational transformation.”
— Anthony D. Romero, executive director of the American Civil Liberties Union

“Once again Ellis Cose holds up a powerful lens to bring to light the thoughts, dreams, and perspectives of African Americans today. His findings and insights are an important contribution to the national conversation on race, class, and opportunity in America.”
— Geoffrey Canada, Educator

“A tremendously important book–gracefully done, painfully perceptive, and, as always in Cose’s writing, fearless in its honesty about the ways that black and white Americans continue to be distanced from each other, even at the topmost levels of success.”
— Jonathan Kozol, author of Savage Inequalities and Letters to a Young Teacher