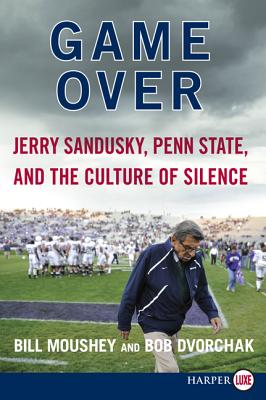 The most comprehensive and explosive book on the worst scandal in the history of sports, Game Over investigates the devastating sexual abuse case that brought down Joe Paterno and forever tarnished the name of Penn State.

In this incisive work of investigative journalism, Bill Moushey and Bob Dvorchak, along with Lisa Pulitzer, go behind the headlines, official statements, and court transcripts to tell the full story of the sexual abuse scandal that has rocked the nation—a tale of power, privilege, money, and politics that leads from the football building on the Penn State campus to the administration’s boardroom to the highest echelons of the state capital and beyond. Eye-opening and fast-paced, Game Over exposes the lies, willful ignorance, and cover-ups that may have allowed a sexual predator to use his position and status to prey on vulnerable young victims for years. Its explosive new discoveries shatter the illustrious image of “Happy Valley”—State College, Pennsylvania, home to one of the nation’s most successful and highly lucrative college football programs.

Moushey, Dvorchak, and Pulitzer craft a story that is as compelling as it is unsettling. Probing beneath the male-dominated football culture, they share the untold stories of the mothers and wives, the sisters and daughters associated with the scandal. They trace the rise and fall of hometown hero and national icon Joe Paterno—the Nittany Lion’s legendary head coach with the most wins in the history of college football, including two national championship titles—juxtaposing Penn State’s success and glory with the hidden anguish of former coach Jerry Sandusky’s accusers. As it details the rise and fall of the individuals associated with the scandal, it also makes clear the larger implications for the university, its vaunted football program, the community, and all of us.

An exploration of the messy morality of pride and loyalty, silence and bearing witness, Game Over will leave readers pondering their own values and their beliefs in right and wrong.

Bill Moushey is a Pulitzer Prize-nominated investigative journalist who specializes in documenting abuses of the criminal justice system. He worked with the Pittsburgh Post Gazette for twenty-three years before becoming a professor in the School of Communication at Point Park University in Pittsburgh. In 1997 he won the National Press Club's Freedom of Information Award for his groundbreaking exposé of an out-of-control witness protection program.

Bob Dvorchak worked for forty-four years as a journalist with Uniontown Newspapers Inc., the Associated Press, and the Pittsburgh Post-Gazette. He has received awards from the American Society of Newspaper Editors and the Golden Quill awards program for deadline reporting and sportswriting.