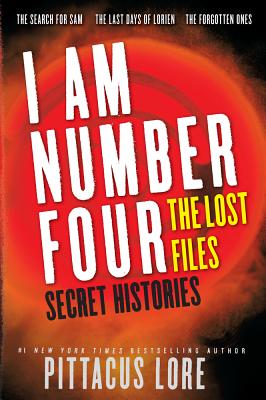 The perfect companion book to the New York Times bestselling I Am Number Four series!

I Am Number Four: The Lost Files: Secret Histories is the second collection of action-packed novellas from Pittacus Lore. Initially published separately as digital originals, these three stories are now together in one print volume.

Lost Files: #4: The Search for Sam follows the rogue Mogadorian Adam on his journey of redemption as he finds the key to saving both Sam Goode and his father, Malcolm.

Lost Files: #5: The Last Days of Lorien reveals how the fight began with the once-peaceful planet being taken by surprise and attacked.

Lost Files: #6: The Forgotten Ones is the riveting continuation of Adam’s story, in which he uncovers an incredible secret that will turn the tide for the Garde.

You know the truth about the Mogadorians’ invasion of Earth and the Garde who will do anything to defeat them—yet there is still so much to learn. The stories in Secret Histories will help you get the answers you seek, but they will not help you stop the coming war. Only the Garde can save our planet.

“I Am Number Four is a breathless page-turner...So, gear-up sci-fi fans, the battle for Earth is on and there’s a new kid in town!”
— Amazon.com, Best Book of the Month Review

“There’s genuine suspense…it’s easy to get lost in the world of the sweet teen from another planet.”
— Chicago Tribune

“This is a can’t-put-it-down book.”
— Justine Magazine

“The action is taut, the characters are fascinating, and the fact that the teens are slowly finding one another and learning about Lorien secrets is sure to yield an impressive all-out battle down the road. This series continues to head in interesting directions.”
— Bulletin of the Center for Children’s Books

“Lore picks up and expands on a strong premise that originated in the first novel. An intriguing potential romantic triangle brewing between John, Six, and Sam adds layers as they search for answers.”
— Voice of Youth Advocates (VOYA)