A Thousand Pieces of You (Firebird #1) (Paperback) 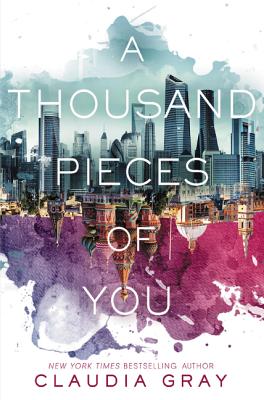 This is book number 1 in the Firebird series.

Cloud Atlas meets Orphan Black in this epic dimension-bending trilogy by New York Times bestselling author Claudia Gray about a girl who must chase her father's killer through multiple dimensions.

Marguerite Caine's physicist parents are known for their groundbreaking achievements. Their most astonishing invention, called the Firebird, allows users to jump into multiple universes—and promises to revolutionize science forever. But then Marguerite's father is murdered, and the killer—her parent's handsome, enigmatic assistant Paul—escapes into another dimension before the law can touch him.

Marguerite refuses to let the man who destroyed her family go free. So she races after Paul through different universes, always leaping into another version of herself. But she also meets alternate versions of the people she knows—including Paul, whose life entangles with hers in increasingly familiar ways. Before long she begins to question Paul's guilt—as well as her own heart. And soon she discovers the truth behind her father's death is far more sinister than she expected.

A Thousand Pieces of You explores an amazingly intricate multi-universe where fate is unavoidable, the truth elusive, and love the greatest mystery of all.

Claudia Gray is the pseudonym of New Orleans-based writer Amy Vincent, the author of the New York Times bestselling Evernight series. She has worked as a lawyer, a journalist, a disc jockey, and an extremely poor waitress. Her grandparents' copy of Mysteries of the Unexplained is probably the genesis of her fascination with most things mysterious and/or inexplicable.

“An action–packed start….Gray effortlessly moves between the SF, historical, and contemporary aspects of her story.” — Publishers Weekly

“This unique science fiction adventure is full of twists, turns, and surprises.” — Booklist

“This well–blended mix of adventure, sci–fi, and romance will appeal to a wide audience.” — School Library Journal

“With on the edge of your seat mystery and suspense, this thrilling fantasy will keep you guessing until the end.” — # 1 NEW YORK TIMES bestselling author Jennifer L. Armentrout

Praise for SPELLCASTER: “SPELLCASTER is a whip–smart read, sinister and delightful at once.” — Kiersten White, NEW YORK TIMES bestselling author of PARANORMALCY

“Three wounded but valiant protagonists confront a monstrous evil with human roots in this promising series opener. This riveting tale will keep readers up late and clamoring for the next installment.” — Kirkus Reviews

“The author’s intricate portrayal of witchcraft—including its theories, rules, spells, and history—raises this novel a notch above others in the genre, and Nadia is an appealing heroine as she juggles personal pain and looming supernatural disaster.” — Publishers Weekly

“…this is a compelling plot that mines the lore and history surrounding witchcraft to pit good against evil in a literally earth–shaking battle.” — Bulletin of the Center for Children’s Books

“A pleasant surprise. A series opener that has its roots in old-fashioned science fiction, and the wings to carry that to modern teen readers.” — Voice of Youth Advocates (VOYA)

“As a spirited romantic adventure, this novel is a delicious success.” — Bulletin of the Center for Children’s Books