The Evolution of Everything: How New Ideas Emerge (Paperback) 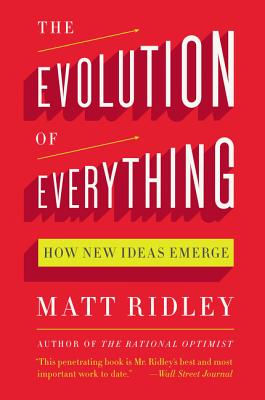 “Mr. Ridley’s best and most important work to date…there is something profoundly democratic and egalitarian—even anti-elitist—in this bottom-up approach: Everyone can have a role in bringing about change.” —Wall Street Journal

The New York Times bestselling author of The Rational Optimist and Genome returns with a fascinating argument for evolution that definitively dispels a dangerous, widespread myth: that we can command and control our world

Human society evolves. Change in technology, language, morality, and society is incremental, inexorable, gradual, and spontaneous. It follows a narrative, going from one stage to the next, and it largely happens by trial and error—a version of natural selection. Much of the human world is the result of human action but not of human design: it emerges from the interactions of millions, not from the plans of a few.

Drawing on fascinating evidence from science, economics, history, politics, and philosophy, Matt Ridley demolishes conventional assumptions that the great events and trends of our day are dictated by those on high. On the contrary, our most important achievements develop from the bottom up. The Industrial Revolution, cell phones, the rise of Asia, and the Internet were never planned; they happened. Languages emerged and evolved by a form of natural selection, as did common law. Torture, racism, slavery, and pedophilia—all once widely regarded as acceptable—are now seen as immoral despite the decline of religion in recent decades.

In this wide-ranging, erudite book, Ridley brilliantly makes the case for evolution, rather than design, as the force that has shaped much of our culture, our technology, our minds, and that even now is shaping our future.

Matt Ridley is the author of books that have sold well over a million copies in 32 languages: THE RED QUEEN, THE ORIGINS OF VIRTUE, GENOME, NATURE VIA NURTURE, FRANCIS CRICK, THE RATIONAL OPTIMIST, THE EVOLUTION OF EVERYTHING, and HOW INNOVATION WORKS. In his bestseller GENOME and in his biography of Francis Crick, he showed an ability to translate the details of genomic discoveries into understandable and exciting stories. During the current pandemic, he has written essays for the Wall Street Journal and The Spectator about the origin and genomics of the virus. His most recent WSJ piece appeared on January 16, 2021. He is a member of the House of Lords in the UK.

“A highly intelligent and bracingly iconoclastic view of the world. It forces us to see life through new eyes.”
— New York Times Book Review

“A compelling argument...a fascinating work...The way the book frames the argument is delightfully novel...Ridley has amassed such a weight of fascinating evidence and anecdote that the pages fly by.”
— The Times (Saturday Review)

“Ridley shows how hard it has been for even the most definite evolutionists to fully abandon the notion of a guiding intelligence…Yet that is what the hard evidence…that Ridley adduces in every chapter compels us all to do.”
— Booklist (starred review)

“This penetrating book is Mr. Ridley’s best and most important work to date…there is something profoundly democratic and egalitarian-even anti-elitist-in this bottom-up approach: Everyone can have a role in bringing about change.”
— Wall Street Journal

“An exceptional book: exceptionally easy to read, easy to understand, easy to appreciate…Of the many good general texts on the subject, THE EVOLUTION OF EVERYTHING emerges as the fittest to champion the case for the ubiquity of evolution.”
— Washington Times

“Ridley is a provocative, occasionally pugnacious writer and his book is intriguing and artfully argued.”
— London Sunday Times

“Highly readable, invariably interesting…Ridley’s laudable aim is to disenthrall us of our intuitive creationism and make us see evolution at work everywhere…Ridley succeeds in spades…He possesses the rare power to see the world in a different light - one made not by great men or women but by undirected, incremental change.”
— New Scientist

“An ingenious study…fascinating…thought-provoking…difficult to put down.”
— Kirkus, starred review

“Impressive…Readers of evolutionary theory, sociology, history, anthropology and philosophy shall be highly entertained by this thought-provoking read.”
— Library Journal

“Building on the timeless insights of Lucretius, Ridley examines how civilization inexorably organizes itself. Wrong-headed social theories, he and Lucretius agree, just get in the way.”
— Stewart Brand, Author, Whole Earth Discipline