The Corporation: An Epic Story of the Cuban American Underworld (Hardcover) 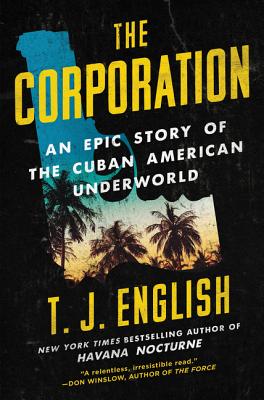 “A mob saga that has it all—brotherhood and betrayal, swaggering power and glittering success, and a Godfather whose reach seems utterly unrivaled. What a relentless, irresistible read.” —Don Winslow, New York Times bestselling author of The Border

A fascinating, cinematic, multigenerational history of the Cuban mob in the US from "America’s top chronicler of organized crime"* and New York Times bestselling author of Havana Nocturne.

By the mid 1980s, the criminal underworld in the United States had become an ethnic polyglot; one of the most powerful illicit organizations was none other than the Cuban mob. Known on both sides of the law as "the Corporation," the Cuban mob’s power stemmed from a criminal culture embedded in south Florida’s exile community—those who had been chased from the island by Castro’s revolution and planned to overthrow the Marxist dictator and reclaim their nation.

An epic story of gangsters, drugs, violence, sex, and murder rooted in the streets, The Corporation reveals how an entire generation of political exiles, refugees, racketeers, corrupt cops, hitmen, and their wives and girlfriends became caught up in an American saga of desperation and empire building. T. J. English interweaves the voices of insiders speaking openly for the first time with a trove of investigative material he has gathered over many decades to tell the story of this successful criminal enterprise, setting it against the larger backdrop of revolution, exile, and ethnicity that makes it one of the great American gangster stories that has been overlooked—until now.

Drawing on the detailed reporting and impressive volume of evidence that drive his bestselling works, English offers a riveting, in-depth look at this powerful and sordid crime organization and its hold in the US.

T.J. English is a noted journalist, screenwriter, and author of the New York Times bestsellers Havana Nocturne, Paddy Whacked, The Savage City, and Where the Bodies Were Buried. He also authored The Westies, a national bestseller, Born to Kill, which was nominated for an Edgar Award, and The Corporation. His journalism has appeared in Esquire, Playboy, and New York magazine, among other publications. His screenwriting credits include episodes for the television dramas NYPD Blue and Homicide, for which he was awarded the Humanitas Prize. He lives in New York City.

“A wild and bloody ride through a harrowing epoch of South Florida history.” — Miami Herald

“English has scored gold again… Riveting nonfiction worthy of the best creative storyteller… A first-rate saga of crime and corruption that is further testament to the author’s reputation among the nation’s most accomplished writers.” — Library Journal (starred review)

“It’s a gripping, blood-soaked story, rich in drama and suspense; if it were a novel, you might expect to see Don Winslow’s name attached to it. Fans of true crime, especially those with a hankering for epic-sized stories, should flock to this book.” — Booklist

“A Mario Puzo-worthy epic story… And it really is a story, as much as it’s a history, in that it has characters we come to know intimately and a narrative arc… It builds to great, Godfather-like dramatic heights.” — Sullivan County Democrat

“Pure enjoyment… The Corporation took over my reading nook, my time and my imagination.” — Living-Las-Vegas.com

“A mob saga that has it all—brotherhood and betrayal, swaggering power and glittering success, and a Godfather whose reach seems utterly unrivaled. What a relentless, irresistible read.” — Don Winslow, New York Times bestselling author of The Force

“While Havana Nocturne makes you glad that Batista and his gangster pals ultimately got what they deserved, it also makes you regret never having gotten the chance to soak up a few mojitos while catching the floor show at the old Tropicana.” — Village Voice

“English capably covers half a century of criminal enterprise, avoiding the clichés of the true-crime genre while stocking his narrative with familiar players: the capos and goons, the cops and informants, a mistress or two, and John F. Kennedy…. Fascinating reading.” — Kirkus Reviews

“A tight storyteller, English provides a juicy mix of true crime and political intrigue, all set against the sexy sizzle of Havana nightlife.” — San Francisco Chronicle

“[An] excellent new book.… [English] provides a detailed account of the personalities and elements that made up Cuban life. His well-researched descriptions of how business, gambling, politics, revolution, music and religion all played off each other give Havana Nocturne a broad context and a knowledgeable edge.” — Washington Post

“Spellbinding prose. . . .  Havana Nocturne is a powerful reminder of how the mob nearly achieved its biggest payday and how Castro beat the house, forever changing the course of history.”
— San Antonio Express-News

“Finally, the definitive book has been written on the Mob’s heyday in Cuba. Havana Nocturne is at once compelling and incisive—an entertaining page-tuner that will both shock and inform.” — Sam Giancana, author of Double Cross

“Engaging….English’s brand of narrative is history, and he aims to set the record straight.” — Miami Herald on Havana Nocturne

“It’s a roaring story, equal parts fact and myth, and for the first time, it gets told in its violent entirety by no less a crime scribe than T.J. English…compellingly telling.” — Miami Sun Post on Havana Nocturne

“Crime writer English (Paddy Whacked) unfolds a story whose main outline will be familiar to any fan of The Godfather: Part II, but whose twists and turns no screenplay could keep up with.” — Kirkus Reviews on Havana Nocturne