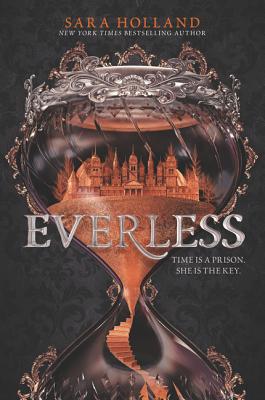 By Sara Holland
$9.99
We Can Order This For You

“Holland’s lush, intricately drawn world hides an undercurrent of darkness underneath a veneer of beauty and finery.”—Publishers Weekly

In the kingdom of Sempera, time is currency—extracted from blood, bound to iron, and consumed to add time to one’s own lifespan. The rich aristocracy, like the Gerlings, tax the poor to the hilt, extending their own lives by centuries.

Jules and her father were servants at Everless, the Gerlings’ palatial estate, until a fateful accident a forced them to flee in the dead of night. When Jules discovers that her father is dying, she knows that she must return to Everless to earn more time for him before she loses him forever.

But going back to Everless brings more danger—and temptation—than Jules could have ever imagined. Caught in a tangle of violent secrets, Jules must find the power to change her fate—and the fate of time itself.

Praised by Kirkus as “a heady, addicting page-turner” and “utterly absorbing”! Fans of Victoria Aveyard, Kendare Blake, and Stephanie Garber will devour the action and romance of Holland’s debut novel—now available in paperback. Plus don't miss the thrilling sequel, Evermore!

“Like her protagonist, Sara Holland has a unique gift for manipulating time. Readers will lose themselves in her stunning prose for hours on end and be hungry for more when they reach the last page.”
— Laura Sebastian, New York Times bestselling author of Ash Princess