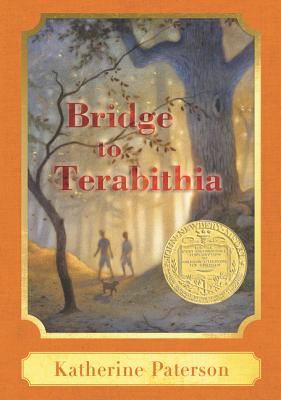 A new hardcover edition of Katherine Paterson’s Newbery-winning favorite, Bridge to Terabithia. One of the stunning new Harper Classics editions of literary treasures.

This Newbery Medal-winning novel by bestselling author Katherine Paterson has been a modern classic about friendship and loss for forty years.

Jess Aarons has been practicing all summer so he can be the fastest runner in the fifth grade. And he almost is, until the new girl in school, Leslie Burke, outpaces him. The two become fast friends and spend most days in the woods behind Leslie’s house, where they invent an enchanted land called Terabithia.

One morning, Leslie goes to Terabithia without Jess and a tragedy occurs. It will take the love of his family and the strength that Leslie has given him for Jess to be able to deal with his grief.

In addition to being a Newbery Medal winner, Bridge to Terabithia was also named an ALA Notable Children's Book and has become a touchstone of children's literature, as have many of Katherine Paterson's other novels, including The Great Gilly Hopkins and Jacob Have I Loved.

Katherine Paterson is one of the world’s most celebrated and beloved authors. Among her many awards are two Newberys and two National Book Awards, and she was recently named a "Living Legend” by the Library of Congress. She has been published in more than 22 languages in a variety of formats, from picture books to historical novels.

Donna Diamond has illustrated numerous children's books, including The Day of the Unicorn by Mollie Hunter and Riches by Esther Hautzig, as well as many book jackets. She lives in Riverdale, NY.

“Set in contemporary rural America, the story is one of remarkable richness and depth, beautifully written.”
— The Horn Book

15 Banned Books Every Tween and Teen Should Read
— Brightly