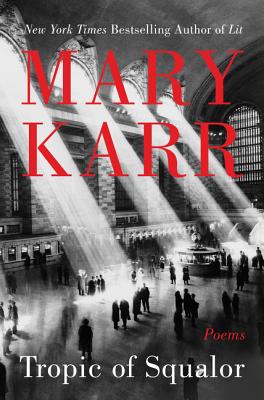 A new volume of poetry from the New York Times bestselling and esteemed author of The Liar’s Club and Lit.

Long before she earned accolades for her genre-defining memoirs, Mary Karr was winning poetry prizes. Now the beloved author returns with a collection of bracing poems as visceral and deeply felt and hilarious as her memoirs. In Tropic of Squalor, Karr dares to address the numinous—that mystery some of us hope towards in secret, or maybe dare to pray to. The "squalor" of meaninglessness that every thoughtful person wrestles with sits at the core of human suffering, and Karr renders it with power—illness, death, love’s agonized disappointments. Her brazen verse calls us out of our psychic swamplands and into that hard-won awareness of the divine hiding in the small moments that make us human. In a single poem she can generate tears, horror, empathy, laughter, and peace. She never preaches. But whether you’re an adamant atheist, a pilgrim, or skeptically curious, these poems will urge you to find an inner light in the most baffling hours of darkness.

Mary Karr is the author of three award-winning, bestselling memoirs: The Liars’ Club, Cherry, and Lit, as well as The Art of Memoir, also a New York Times bestseller. She received Guggenheim and Radcliffe Fellowships for poetry and is the Peck Professor of Literature at Syracuse University.

“A catalogue of broken graces.... Scorched, palpable, sometimes pungent, sometimes brutal: Karr’s new collection is a mixture of tight narratives that end without resolution, hymns of unsettled suffering, and confused prayers.” — The Millions

“Dark and luscious…tender and visceral and, at times, humorous; covering everything…in a straight-forward way that doesn’t sacrifice the beauty of her voice and language.” — Shondaland.com

“As in all her work, Karr’s genius is in creating her own music from a mashup of lexicons, daringly and often wittily infusing the lyrical with everyday vernacular.” — BookPage

“Formally and emotionally, this is a rich, mysterious collection that rewards re- reading.” — The Red Hook Star Revue