Treasures of the Twelve (Hardcover) 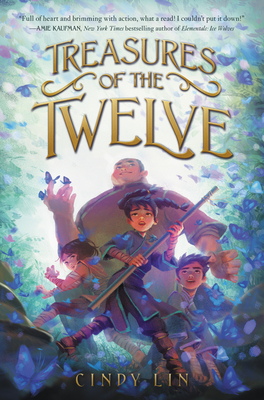 Bursting with heart and packed with exciting new places, dangerous obstacles, and mysterious powers, Cindy Lin’s sequel to The Twelve is a page-turning race against time that’s perfect for fans of The Zodiac Legacy and Spirit Animals series!

When Usagi first met the fabled Heirs of the Twelve, she had just one goal: saving her sister, Uma.

But despite increasing her zodiac powers by becoming the new Rabbit Warrior Heir, Usagi’s attempts to rescue Uma have failed. Soon Usagi and the Heirs realize that to truly free those they love from the Dragonlord, they must take on a dangerous task: finding the ancient treasures of The Twelve.

Hidden away by the last zodiac warriors, these treasures have miraculous powers. Their wielder can create massive sandstorms, bring the clouds down to earth to enshroud everyone nearby in a thick fog, or even grant any wish they desire—for a brief time.

Usagi and the Heirs must journey farther than they ever have before and take on the riddles and obstacles that await them on their hunt for the ancient relics.

But will they find them in time to save Uma?

A former journalist with degrees from the University of Pennsylvania and Columbia University, Cindy Lin has worked for Sony Pictures Entertainment and has written and produced many multimedia news features for children, one of which received a Peabody Award. The Twelve is her debut novel.

Full of heart and brimming with action, what a read! I couldn’t put it down, but I didn’t want it to end! I know I'll return to this enthralling and inventive world time and time again. — Amie Kaufman, New York Times bestselling author of Elementals: Ice Wolves

Praise for THE TWELVE: “[A] rip-roaring debut…Ideal for fans of stories with lots of heart, great lore, and plenty of twists along the way.”  — ALA Booklist

“Aficionados will delight in the plethora of fast-paced action scenes sprinkled with martial arts wisdom, and there is much potential for sequels…and, of course, for Usagi to continue developing her powers.”   — Bulletin of the Center for Children’s Books