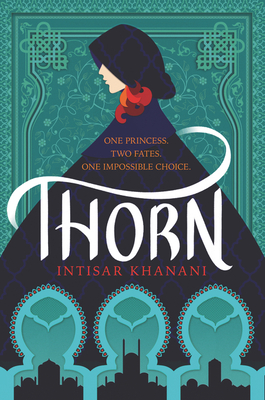 This is book number 1 in the Dauntless Path series.

Hunted meets The Wrath and the Dawn in this bold fairytale retelling—where court intrigue, false identities, and dark secrets will thrill fans of classic and contemporary fantasy alike.

Princess Alyrra has always longed to escape the confines of her royal life, but when her mother betroths her to a powerful prince in a distant kingdom, she has little hope for a better future.

Until Alyrra arrives at her new kingdom, where a mysterious sorceress robs her of both her identity and her role as princess—and Alyrra seizes on the opportunity to start a new life for herself as a goose girl.

But as Alyrra uncovers dangerous secrets about her new world, including a threat to the prince himself, she knows she can’t remain silent forever. With the fate of the kingdom at stake, Alyrra is caught between two worlds, and ultimately must decide who she is and what she stands for.

Originally self-published as an ebook and now brought to life in hardcover with a refreshed design and completely revised text, Thorn also features an additional short story set in-world, The Bone Knife.

Intisar Khanani grew up a nomad and world traveler. Born in Wisconsin, she has lived in five different states as well as in Jeddah on the coast of the Red Sea. She first remembers seeing snow on a wintry street in Zurich, Switzerland, and vaguely recollects having breakfast with the orangutans at the Singapore Zoo when she was five. She currently resides in Cincinnati, Ohio, with her husband and two young daughters.

Intisar is also the author of Thorn. To find out what she is working on next and connect with her online, visit www.booksbyintisar.com.

“Set in a dark and dangerous world…well-written and dramatically told, teens will find much to love in a novel in which the princess grows to become a force to be reckoned with.” — School Library Journal (starred review)

“Khanani beautifully crafts Alyrra’s quiet but clear journey of self-definition… [Thorn] is sure to appeal to fans of Carson’s The Girl of Fire and Thorns and Ahdieh’s The Wrath and the Dawn.” — Bulletin of the Center for Children’s Books (starred review)

“Immersive and captivating…[will] draw in fans of fantasy and slow-burn romance.” — Kirkus Reviews

“Thorn is a lovely atmospheric fairytale fantasy about a girl and her found family. I loved it!” — Gail Carriger, New York Times-bestselling author of the Parasol Protectorate and Finishing School series

"A quietly profound and beautiful fairytale retelling that I'll be recommending for years." — S. A. Chakraborty, author of City of Brass

“Lush and vividly imagined, THORN takes a folktale we think we know and turns it into something new: a story of and for our time, with lessons that will remain with readers long after they have finished the last, glorious pages.”
— G. Willow Wilson,  author of The Bird King

"Khanani’s Thorn explores themes of resilience, responsibility, and identity in a darkly captivating retelling that is more than the sum of its parts. This is the kind of book that digs under your skin and makes a home, demanding reflection and frequent re-reads.”
— Tracy Banghart, author of Grace and Fury

"A vivid retelling of a classic tale, full of love, justice, and empathy."  — Emily B Martin, author of the Creatures of Light series

“This Middle Eastern–inspired retelling of "The Goose Girl" has much that will entice fantasy readers. A measured romance and an awareness of contemporary social issues elevate the text, but most alluring of all is Alyrra’s strong, sensible heart.” — Booklist