The Last Widow: A Novel (Will Trent #9) (Paperback) 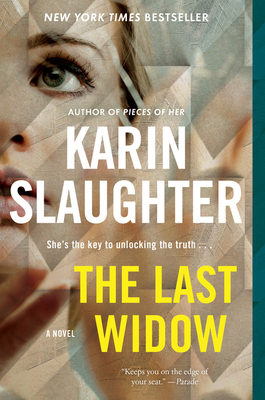 This is book number 9 in the Will Trent series.

A WILL TRENT NOVEL

Karin Slaughter, the New York Times bestselling author of PIeces of Her, brings back Will Trent and Sara Linton in this superb and timely thriller full of devious twists, disturbing secrets, and shocking surprises you won’t see coming

On a hot summer night, a scientist from the Centers for Disease Control is grabbed by unknown assailants in a shopping center parking lot. The authorities are desperate to save the doctor who’s been vanished into thin air.

One month later, the serenity of a sunny Sunday afternoon is shattered by the boom of a ground-shaking blast—followed by another seconds later. One of Atlanta’s busiest and most important neighborhoods has been bombed—the location of Emory University, two major hospitals, the FBI headquarters, and the CDC.

Medical examiner Sara Linton and her partner Will Trent, an investigator with the Georgia Bureau of Investigation, rush to the scene—and into the heart of a deadly conspiracy that threatens to destroy thousands of innocent lives. When the assailants abduct Sara, Will goes undercover to save her and prevent a massacre—putting his own life on the line for the woman and the country he loves.

Karin Slaughter is the author of more than twenty instant New York Times bestselling novels, including the Edgar–nominated Cop Town and standalone novels The Good Daughter, Pretty Girls, and Girl, Forgotten. She is published in 120 countries with more than 40 million copies sold across the globe. Pieces of Her is a #1 Netflix original series starring Toni Collette. The Will Trent Series will air on ABC in 2023, and The Good Daughter and False Witness are in development for film/tv. Slaughter is the founder of the Save the Libraries project—a nonprofit organization established to support libraries and library programming. A native of Georgia, she lives in Atlanta.

“There’s never a dull moment in Georgia with Karin Slaughter on the literary rampage.” — Washington Post on The Last Widow

“With a well-written, intriguing plot and an edge-of-the-seat ending, this is sure to keep readers up late into the night.” — Library Journal (starred review) on The Last Widow

“With familiar characters, further developed here, and a plot as timely as it is riveting, Slaughter’s latest will enthrall her ever-growing legion of fans. HIGH-DEMAND BACKSTORY: Slaughter’s thrillers have become near-automatic best-sellers, and this is one of her best.” — Booklist (starred review) on The Last Widow

“Vivid characters and rapidly escalating stakes complement the riveting, adrenaline-fueled plot. Along the way, Slaughter examines such topics as misogyny, white nationalism, and the politicization of law enforcement. Thriller fans will devour this visceral, gratifying entry.” — Publishers Weekly on The Last Widow