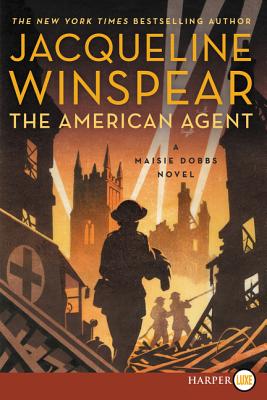 By Jacqueline Winspear
$29.99
On Our Shelves Now

This is book number 15 in the Maisie Dobbs series.

Beloved heroine Maisie Dobbs, “one of the great fictional heroines” (Parade), investigates the mysterious murder of an American war correspondent in London during the Blitz in a page-turning tale of love and war, terror and survival.

When Catherine Saxon, an American correspondent reporting on the war in Europe, is found murdered in her London digs, news of her death is concealed by British authorities. Serving as a linchpin between Scotland Yard and the Secret Service, Robert MacFarlane pays a visit to Maisie Dobbs, seeking her help. He is accompanied by an agent from the US Department of Justice—Mark Scott, the American who helped Maisie escape Hitler’s Munich in 1938. MacFarlane asks Maisie to work with Scott to uncover the truth about Saxon’s death.

As the Germans unleash the full terror of their blitzkrieg upon the British Isles, raining death and destruction from the skies, Maisie must balance the demands of solving this dangerous case with her need to protect Anna, the young evacuee she has grown to love and wants to adopt. Entangled in an investigation linked to the power of wartime propaganda and American political intrigue being played out in Britain, Maisie will face losing her dearest friend—and the possibility that she might be falling in love again.

“Books in the Maisie Dobbs series are always as much about the heroine’s ongoing journey as they are about the mysteries she solves, and it’s the big changes in her life that make this 15th ‘Maisie’ book one of the best.”
— Minneapolis Star Tribune

“Through it all she has solved sometimes harrowing cases with a mixture of intelligence, intuition, determination and compassion that makes her — and it’s an odd compliment, I know — one of the most soothing characters in crime fiction. Reading a Maisie Dobbs book is a little like spending time with an old friend you don’t see often enough, if your old friend’s gig is tracking down and capturing criminals.”
— Tampa Bay Times

“The London blitz is the backdrop to Winspear’s latest as the inimitable Maisie Dobbs investigates the death of Catherin Saxon, an intrepid American journalist determined to document wartime Britain’s hardships for the folks back home. An immersive tale of wartime grit and grief.”
— Booklist

“Everything in this series turns on the psychological traumas of war. That’s what gives Maisie’s sometimes prosaic cases their sturdy backbone and air of urgency—that and Maisie’s own dynamic character. Hang on to your helmet and carry on, girl.”
— New York Times Book Review

“Advances Maisie’s inspiring activities, highlights the bravery of an embattled people during the Second World War, and intimates that lessons from that period have yet to be learned.”
— Kirkus

“Offers an intense portrayal of how ordinary British residents attempted to manage their ordinary lives amid extraordinary and traumatic circumstances. Maisie solves the crime (naturally), but just as compelling is her own personal journey, which leaves her poised to begin yet another new chapter of her eventful life.”
— BookReporter