Set Fire to the Gods (Paperback) 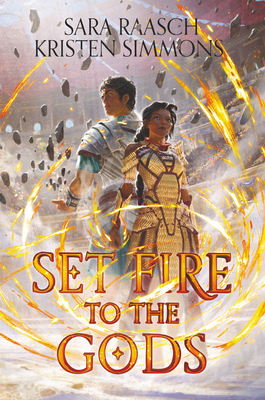 Avatar: The Last Airbender meets Gladiator in the first book in this epic fantasy duology in which two warriors must decide where their loyalties lie as an ancient war between immortals threatens humanity—from Sara Raasch, the New York Times bestselling author of the Snow Like Ashes series, and Kristen Simmons, acclaimed author of Pacifica and The Deceivers. Perfect for fans of An Ember in the Ashes, And I Darken, and The Winner’s Curse.

Ash is descended from a long line of gladiators, and she knows the brutal nature of war firsthand. But after her mother dies in an arena, she vows to avenge her by overthrowing her fire god, whose temper has stripped her country of its resources.

Madoc grew up fighting on the streets to pay his family’s taxes. But he hides a dangerous secret: he doesn’t have the earth god’s powers like his opponents. His elemental gift is something else—something that hasn’t been seen in centuries.

When an attempted revenge plot goes dangerously wrong, Ash inadvertently throws the fire and earth gods into a conflict that can only be settled by deadly, lavish gladiator games, throwing Madoc in Ash’s path. She realizes that his powers are the weapon her rebellion needs—but Madoc won’t jeopardize his family, regardless of how intrigued he is by the beautiful warrior.

But when the gods force Madoc’s hand, he and Ash uncover an ancient war that will threaten more than one immortal—it will unravel the world.

Sara Raasch has known she was destined for bookish things since the age of five, when her friends had a lemonade stand and she tagged along to sell her hand-drawn picture books too. Not much has changed since then: her friends still cock concerned eyebrows when she attempts to draw things, and her enthusiasm for the written word still drives her to extreme measures. She is the New York Times bestselling author of the Snow Like Ashes series, These Rebel Waves, and These Divided Shores. You can visit her online at www.sararaaschbooks.com and @seesarawrite on Twitter.

Kristen Simmons is the critically acclaimed author of the Article 5 series, The Glass Arrow, Metaltown, Pacifica, and The Deceivers. She has worked with survivors of abuse and trauma as a mental health therapist, taught Jazzercise in five states, and is forever in search of the next best cupcake. Currently she lives in Cincinnati, OH, with her husband, where she spends her days supporting the caffeine industry and chasing her rambunctious son. You can visit her online at www.kristensimmonsbooks.com.

“A high stakes YA fantasy full of elemental gladiator fight sequences and political schemes … [that] puts familiar Greco-Roman mythology in a blender with Avatar: The Last Airbender…. Raasch and Simmons balance a large and memorable cast of characters with aplomb.”
— School Library Journal

“The history of this world is a fascinating one. . . both heartbreaking and intriguing to observe.”
— Bulletin of the Center for Children’s Books

“Sara Raasch and Kristen Simmons’s action-packed epic of noble gladiators and warring gods is a must for mythology lovers. With twists and schemes aplenty, this new world of gods and elemental powers keeps the pages turning. COMPLETELY ENTHRALLING. I can’t wait for more of this world.”
— Kendare Blake, #1 New York Times bestselling author of the Three Dark Crowns series

“Set Fire to the Gods is every bit as ACTION-PACKED, IMAGINATIVE, HEROIC, AND DEEPLY MAGICAL as its title suggests, with an ending that will leave you reeling!”
— Katharine McGee, New York Times bestselling author of American Royals