The Apprentice: Trump, Russia and the Subverstion of American Democracy (Large Print / Paperback) 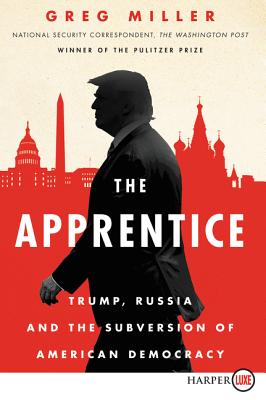 By Greg Miller
This book is no longer available.
Not Available

From two-time Pulitzer Prize–winning Washington Post national security reporter Greg Miller, the truth about Vladimir Putin’s covert attempt to destroy Hillary Clinton and help Donald Trump win the presidency, its possible connections to the Trump campaign, Robert Mueller’s ensuing investigation of the president and those close to him, and the mystery of Trump’s steadfast allegiance to Putin.

It has been called the political crime of the century: a foreign government, led by a brutal authoritarian leader, secretly interfering with the American presidential election to help elect the candidate of its choice. Now two-time Pulitzer Prize–winning Washington Post national security reporter Greg Miller investigates the truth about the Kremlin’s covert attempt to destroy Hillary Clinton and help Donald Trump win the presidency, Trump’s steadfast allegiance to Vladimir Putin, and Robert Mueller’s ensuing investigation of the president and those close to him.

Based on interviews with hundreds of people in Trump’s inner circle, current and former government officials, individuals with close ties to the White House, members of the law enforcement and intelligence communities, foreign officials, and confidential documents, The Apprentice offers striking new information about:

Deeply reported and masterfully told, The Apprentice is essential reading for anyone trying to understand Vladimir Putin’s secret operation, its catastrophic impact, and the nature of betrayal.

GREG MILLER is a national security reporter for the Washington Post. He was part of the team that won the 2018 Pulitzer Prize for their groundbreaking stories on Russia’s 2016 election interference and also part of the team awarded the 2014 Pulitzer for coverage of American surveillance programs revealed by Edward Snowden.

“Lucid and startling…a scathing portrait of the commander-in-chief’s personal and political failings, compounded by the dismal inability of other politicians and institutions to get to grips with the abundant evidence of Russian meddling….The book is the clearest account yet of what Russia actually did.”
— Times (UK)

“We cannot understand what happened in the 2016 election, Russia-gate or the imploding Trump presidency by reading the 24-hour digital news on our phones....Fortunately, we still have a simple technology invented nearly six centuries ago: books. Greg Miller has written a damn good one.”
— Kai Bird, Pulitzer Prize-winning historian