Young Bucks: Killing the Business from Backyards to the Big Leagues (Hardcover) 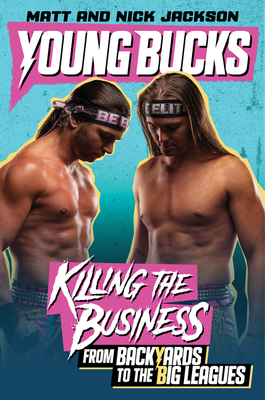 By Matt Jackson, Nick Jackson
$27.99
On Our Shelves Now

The electric and daring independent wrestling tag team share their inspiring story of how two undersized, ambitious athletes from Southern California became the idols of millions of popular sports fans, coveted among the ranks of AEW’s elite wrestling lineup.

Featuring over 60 photographs and alternating between each brother’s perspective, this entertaining memoir is a complete portrait of what it means to grow into—and give back to—wrestling, the sport and profession they embody and love.

Famous for their highflying moves, Superkicks, and viral videos, Matt and Nick Jackson are two of the hottest and most talented competitors in professional wrestling today. Known as the Young Bucks, this pair of ambitious brothers are an inspiration to both fans and aspiring wrestlers worldwide due to their message of resilience and determination. That they are also faithful family men devoted to their loved ones gives them additional appeal.

Young Bucks begins in Southern California, where two young boys grew up dreaming of success and fame. Matt and Nick look back on the sacrifices they made to achieve their ambitions, from taking odd jobs to pay for their own wrestling ring to hosting backyard events with friends. They share their joy at being recruited into the independent California wrestling circuit and the work it took to finally make it professionally, and speak frankly about what it means to have the support of millions of fans cheering their talents in arenas nationwide. The Young Bucks talk endearingly about their sport, their faith, and their families, sharing personal reflections and behind-the-scenes anecdotes while paying tribute to the wrestling acts and inspirations that came before them. They also elaborate on this historical time in the evolution of wrestling, as the sport and its culture dramatically change day by day.

Told with the brothers’ signature wit and charm, Young Bucks is warm, heartfelt story of hope, perseverance, and undying ambition.

The Young Bucks is an American professional wrestling tag team, consisting of brothers Matt and Nick Massie (also known by their ring names Matt and Nick Jackson) from Southern California. They are currently a part of All Elite Wrestling (AEW), for which they made their TNT debut in October 2019 to millions of fans across the United States. They previously worked for various promotions on the independent circuit, most notably Total Nonstop Action Wrestling (TNA), New Japan Pro Wrestling (NJPW), Ring of Honor (ROH) and Pro Wrestling Guerrilla (PWG).

“These guys are the pioneers of making it BIG in the pro wrestling business outside of the corporate structure by doing things their own way: Booking their own tours worldwide, creating their own mainstream bestselling merch, producing their game-changing weekly YouTube series and basically making every critic eat their own words by constantly having excellent matches, with amazing athleticism and a dose of satirical humour. On top of that, they’ve remained the same guys and retained their strong family values the whole time.  Matt and Nick are the true definition of success in the wrestling world... and beyond.”
— Chris Jericho, multiple-time world champion and author of three New York Times bestsellers

"The Young Bucks are two guys who not only beat the odds to become one of the greatest, most popular tag teams ever, but also two industry changing visionaries. Matt and Nick are two of the smartest, hard-working, passionate individuals I’ve met during my 28 year career. With the creation of AEW, The Bucks will definitely leave the pro wrestling industry in a much better place then they discovered it in."
— Matt Hardy, multiple-time world tag team champion

“Through selfless sacrifice and consistent show-stealing performances, the Young Bucks make an argument for greatest tag team of all time. And through their innovations in merchandising, self-branding, and ability to inspire, they also make an argument for the most influential wrestlers of the last decade. If you enjoy anything about pro-wrestling in the year 2020, chances are you owe at least a bit a gratitude to these good Christian boys. They’re the architects."
— Kenny Omega, the greatest wrestler alive (probably) and Executive Vice President of All Elite Wrestling

“Through innovation both inside the ring and in marketing themselves outside the ring, The Young Bucks opened the door and led the way to a seismic change in the pro wrestling industry, which changed the very structure of the game.”
— Dave Meltzer, journalist, sports historian, and publisher and editor of the Wrestling Observer Newsletter

"This intriguing, personal, family-centered telling of the Jacksons’ story will draw in and inspire many readers."
— Library Journal

“Young Bucks makes you feel motivated to pursue your own dreams and shows us the real meaning behind the phrase, ‘Never give up’…Whether you’re looking for a book on pro wrestling, a motivational journey or an example of how to take a risk and start a business to do things on your own terms: this is a book for you.”
— SLAM! Wrestling