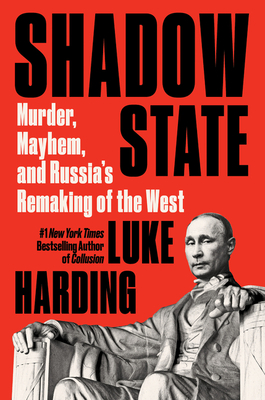 A thrilling account of how Russia is waging a hidden war against America and the West, using espionage, corruption, fake news, and KGB-style murder

March 2018. Two Russian assassins arrive in a provincial English city to kill a former officer from Russia’s GRU intelligence agency. His crime? Passing secrets to British spies. The poison? A lethal nerve agent, novichok. The attempted execution was a reminder – as if one were needed - of Russia’s contempt for international norms. The Soviet Union and its doctrine are long gone, but the playbook used by the Kremlin’s spies during that long confrontation with the West is back. And the underlying goal remains the same: to undermine democracy and exploit divisions within American and European society and politics.

Moscow’s support for Donald Trump in the 2016 presidential election has grown into the biggest political scandal of modern times. Its American players are well-known. In Shadow State, award-winning journalist and bestselling author Luke Harding reveals the Russians behind the story: the spies, hackers and internet trolls. Harding charts how the Kremlin has updated Communist-era methods of influence and propaganda for the age of Facebook and Twitter, and considers the compelling question of our age: what exactly does Vladimir Putin have on President Trump?

Similar to those of the Cold War, Putin’s ambitions are truly global. His emissaries include oligarchs, bankers, lawyers, mercenaries, and agents of influence. They roam from Salisbury to Helsinki, Ukraine to Central Africa, London to Washington, D.C. Shadow State is the singular account of how the Kremlin seeks to reshape the world, to divide the US from its European friends, and to remake America in its own dark and kleptocratic image. This is an essential read for anyone who wants to understand how our politics came to be so chaotic and divided. Nothing less than the future of Western democracy is at stake.

is a journalist, writer, and awardwinning correspondent with the Guardian. He has reported from Delhi, Berlin, and Moscow, and covered wars in Afghanistan, Iraq, Libya, and Syria. Between 2007 and 2011, he was the Guardian’s Moscow bureau chief. In February 2011, the Kremlin deported him from the country in the first case of its kind since the Cold War. He is the author of several books, most recently the number one New York Times bestseller Collusion: Secret Meetings, Dirty Money, and How Russia Helped Donald Trump Win.