When the Schools Shut Down: A Young Girl's Story of Virginia's "Lost Generation" and the Brown v. Board of Education of Topeka Decision (Hardcover) 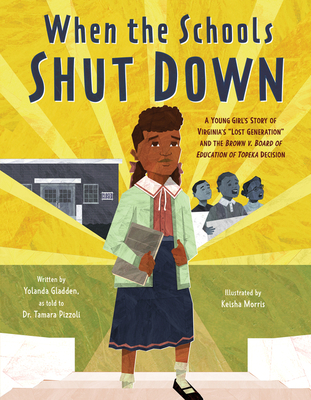 An awe-inspiring autobiographical picture book about a young African American girl who lived during the shutdown of public schools in Farmville, Virginia, following the landmark civil rights case Brown vs. Board of Education of Topeka.

Most people think that the Brown vs. Board of Education decision of 1954 meant that schools were integrated with deliberate speed. But the children of Prince Edward County located in Farmville, Virginia, who were prohibited from attending formal schools for five years knew differently, including Yolanda.

Told by Yolanda Gladden herself, cowritten by Dr. Tamara Pizzoli and with illustrations by Keisha Morris, When the Schools Shut Down is a true account of the unconstitutional effort by white lawmakers of this small Virginia town to circumvent racial justice by denying an entire generation of children an education.

Most importantly, it is a story of how one community triumphed together, despite the shutdown.

The inspiring events that take place in When the Schools Shut Down were experienced firsthand by Yolanda Gladden herself, who is the mother of three and lives in Farmville, Virginia.

Keisha Morris is an illustrator who grew up in Charlottesville, Virginia, and currently resides in Reno, Nevada. She earned her BFA in illustration at the Fashion Institute of Technology in New York and enjoys creating characters whose personalities jump off the page. Keisha is the illustrator of Bitty Brown Babe, written by Deborah LeFalle, and Over in Motown, written by Debbie Taylor. When she is not drawing, she loves spending time with her wife, daughter, and two crazy cats, Elphie and Ollie!

Dr. Tamara Pizzoli, who helped pen When the Schools Shut Down, is a Texas-born publisher, curator, author, and educator. She is the author of many celebrated books for children, including Tallulah the Tooth Fairy CEO.

[A]n engaging, community care–centered examination of segregation in the Virginia school system before and after Brown v. Board of Education. — Publishers Weekly (starred review)

A celebration of a community stepping up to educate its children, and a message that learning takes place in many venues other than schools. — Bulletin of the Center for Children’s Books