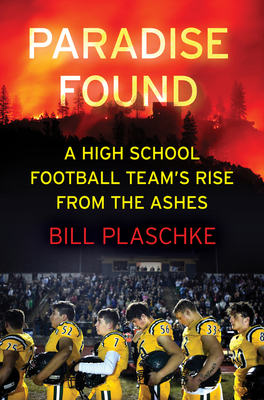 "Friday Night Lights meets Unbroken." —Tony Reali | "One of the most profound stories you will ever read." —Ian O'Connor | "Plaschke delivers a masterpiece." —Jeff Pearlman

From L.A. Times columnist and ESPN Around the Horn panelist Bill Plaschke, a story of tragedy, triumph, and the remarkable power of high school football in one small California town

On November 8, 2018, the Camp Fire ravaged the town of Paradise, California. The fire, which burned up to 80 acres per minute, killed 86 people, and nearly every building and home in the town was reduced to ashes. In a single day, Paradise, a proud working-class town in the foothills of the Sierra Nevadas, saw its population fall from 25,000 to 2,000.

The Paradise High football team had long been the town’s source of joy and inspiration. But in the wake of the fire, their season was abruptly cancelled on the eve of the playoffs. Their championship hopes were gone. Their program’s survival seemed doubtful—it wasn’t even clear whether Paradise High would continue to exist.

Coach Rick Prinz had planned to retire that year after guiding the Paradise High Bobcats for two decades. But after the fire forever altered his beloved town, he realized he couldn’t walk away. What ensued was the challenge of a lifetime. Of the 104 football players at Paradise, 95 had lost their homes. His varsity squad, which had stood 76 strong the previous season, was down to 22. Most of those who remained were homeless, sleep-deprived, lost. On the first day of spring practice, on a debris-ridden patch of grass at nearby Chico Airport, Prinz’s team didn’t even have a football. It was the humble beginning to a memorable journey.

Bill Plaschke, longtime columnist for the Los Angeles Times, followed the Paradise Bobcats throughout a most remarkable season. In this gripping, deeply-reported story of tragedy and resilience, Plaschke reveals the unique power of sports to unite, to inspire, and to heal. As the Paradise players fought to rebuild their broken lives, they found strength in the support of their teammates—and as football returned to Paradise, so, too, did the spirit of the town itself.

Bill Plaschke has been an L.A. Times columnist since 1996. He has been named national sports columnist of the year eight times by the Associated Press. He is the author of five books, including a collection of his columns entitled, Plaschke: Good Sports, Spoil Sports, Foul Ball and Oddballs. Plaschke is also a panelist on the popular ESPN daily talk show, Around the Horn. He has been named Man of the Year by the Los Angeles Big Brothers/Big Sisters and has received a Pursuit of Justice Award from the California Women’s Law Center.

"With his pitch-perfect blend of meticulous reporting and vivid storytelling, Bill Plaschke takes you inside the huddle, the homes and the hearts of the Paradise Bobcats and coach Rick Prinz after a historic wildfire leveled their town. Come on up to the rising. Don't wait for the movie. Read the book. This book.'' — DAN SHAUGHNESSY, author of Wish It Lasted Forever: Life with the Larry Bird Celtics

“Plaschke writes with an empathy and authority that only comes with having earned the trust of those in this resilient town. Tenderly written, expertly researched and reported, it is a book with inspiration on every page.” — GENE WOJCIECHOWSKI, ESPN's "College GameDay"

"Heart-rending. ... You must read this book. Period." — Chico Enterprise Record

"As one of the greatest sportswriters of all time, Bill Plaschke delivers a towering account of a wildfire matched in intensity only by the raging spirit of a California town and a football team that refused to be destroyed by it. Paradise Found is not a sports book. It's a book about all-American resilience, and one of the most profound stories you will ever read." — IAN O'CONNOR, New York Times Bestselling Author of Belichick

"A story with more big-picture stakes than that of Friday Night Lights. ... [Plaschke is] a graceful and perceptive writer. ... A moving and well-told account of how a battered team regrouped after catastrophic losses." — Kirkus Reviews

"In Paradise Found Bill Plaschke penetrates the ash and smoke left behind after a devastating fire nearly destroyed a community. Writing with compassion and grace, he reveals what still remained untouched—the big hearts that brought a football team back on the field and breathed new life into a town that desperately needed it".  — GLENN STOUT, editor of The Year's Best Sports Writing and author of Young Woman and the Sea

“Bill Plaschke captures the humanity of sports better than any writer in America. In Paradise Found the fire that devastated a community forged a team. But what happens after that may be the greatest lesson in life: paradise is fighting for each other. Friday Night Lights meets Unbroken."  — TONY REALI, host, Around the Horn

"Bill Plaschke is one of America's great sports writers for a reason. This touching, heartwarming saga of a high school football team facing an unprecedented test reminds us that, even in dark times, hope finds a way. Once again, Plaschke delivers a masterpiece." — JEFF PEARLMAN, New York Times bestselling author of Three-Ring Circus

"Intense and inspiring. ... Told with clear-eyed honesty, this story of unfaltering purpose will resonate." — Library Journal