Eurotrash: Why America Must Reject the Failed Ideas of a Dying Continent (Hardcover) 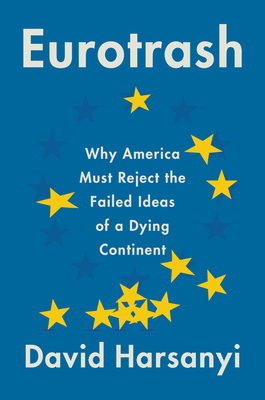 Why should America try to be more like countries that are worse in nearly every way?

Europe has been declining under the weight of its antiquated institutions, economic fatigue, moral anemia and cultural surrender. Yet American politicians, technocrats, academics, and pundits argue, with increasing popularity, that Americans should look across the Atlantic for solutions to the nation’s problems, including on issues like health care, the welfare state, immigration, and a bloated bureaucracy.

In Eurotrash, David Harsanyi argues we are looking in the wrong place. By every economic and societal measure, the United States is more tolerant than Europe. It is more welcoming of immigrants, but also far more successful at assimilating them. Minorities do far better in United States. Our economy is dominant. Only one European company appears in top 10 corporate powerhouses in the world and only seven in the top 50. Americans make up nearly half of the list.

Americans are far more charitable and happier than Europeans. Our slightly lower life expectancy and our slightly higher infant mortality rate are not a result of substandard care, but a statistical misunderstanding based on the fact we treat every life as one worth saving.

David Harsanyi is a senior writer at National Review, a nationally syndicated columnist, and author of four books. A contributor to the New York Post, his work has appeared in the Wall Street Journal, Washington Post, Reason, USA Today, and numerous other publications, and he has been featured on Fox News, CNN, MSNBC, NPR, ABC World News Tonight, NBC Nightly News and dozens of radio talk shows across the country. He lives in Washington, D.C.

“David Harsanyi offers a blunt warning about how the European Union’s deplorable ideas, attitudes, and institutions—atheism, assisted suicide, inert fertility, anemic economic growth, a shrinking population, socialism, pacifism, utopianism, climate change religion, restrictions against free expression and speech, anti-Semitism, and open borders—have rendered Europe as irrelevant abroad as it is an anti-Democratic mess at home. Harsanyi incisively warns Americans that Europe is neither a model for emulation nor will likely change its disastrous ways. His book should warn all Americans of what not to do.” — Victor Davis Hanson

“David Harsanyi has written an important book. Eurotrash not only offers us a stark warning about the dangers of following in Europe’s footsteps but reminds us about the things that make the United States uniquely tolerant, wealthy, and free.” — Meghan McCain

“For more than two hundred years, the United States has been home to people fleeing repressive, often oppressive, European culture. Yet today Americans are increasingly looking toward Europe for answers to our cultural, political, and economic problems. In his new book, David Harsanyi brilliantly outlines why that’s exactly the wrong thing to do—and why traditional American ideas remain superior.” — Brian Kilmeade

“The United States took the best parts of European policy and culture as the foundation for creating the greatest country ever to exist. In Eurotrash, David Harsanyi eloquently deconstructs the myths of European supremacy and explains how the answers to America’s problems lie within.” — Dana Loesch