Transitional: How to Live Your Authentic Life (Hardcover) 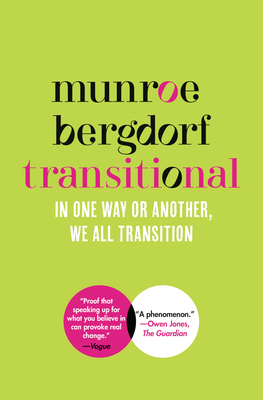 By Munroe Bergdorf
$26.99
Not Yet Published

In this thought-provoking, timely book, model and activist Munroe Bergdorf reflects on individuality, evolution, and the ever-changing nature of identity, revealing how they have shaped her own lived experience and how society shapes—and is shaped by—each.

“Sometimes, not often, but sometimes, I ask myself this question: what if I'd just done nothing?”

When Munroe Bergdorf began to transition in 2009, her only goal was blending in. She wanted nothing more than to “pass”—to be perceived as the gender by which she identified. “I was of the mindset that in order to transition successfully I needed to change other people’s perception of who I was.”

More than a decade later, Bergdorf has reconsidered that thinking. “We do not all of a sudden become a whole different person upon the realization of our transness. . . . As time goes on, we all develop as people. And it struck me that none of us ever becomes someone else entirely—regardless of how we identify—but nor do we stay the same forever, either.” For Bergdorf, transitioning is an ingrained part of the human experience, not just a process that only trans people go through. It’s universal. Everyone changes.

Part memoir, part big idea book, Transitional explores the nature of transition, its significance in Bergdorf’s life, how it impacts—and is considered and influenced by—society, and what it means for our own experiences. Bergdorf explains how she came to revise her outlook and examines how society views change in six vital areas of human experience—adolescence, sexuality, gender, relationships, identity, and race. Using an intersectional approach, she deconstructs the stigma, bias, and prejudice within ourselves and one another, and redefines what it means to be “transitional.”

Ultimately, Bergdorf seeks to bring us closer to a shared consciousness. Transitional reminds us that our unique differences give us power and shows how these differences can be harnessed as a tool to heal, build community, inspire personal growth, and forge a path for progress forward together.

Munroe Bergdorf is a writer, model, and activist. She was the first transgender model in the UK to be the face of L’Oreal. She has spoken on international panels from Oxford to Princeton and contributed to publications such as the Guardian, Grazia, i-D, Teen Vogue, Elle, and Paper. In 2019, she was awarded an honorary doctorate for her contribution to campaigning for transgender issues by the University of Brighton. She was recently appointed a National Advocate for UN Women and sits on L’Oréal’s Diversity and Inclusion board. She lives in London.