Letters from a Stoic (A Penguin Classics Hardcover) (Hardcover) 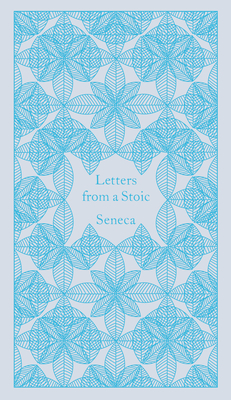 World-changing ideas meet eye-catching design: the best titles of the extraordinarily successful Great Ideas series are now packaged in Coralie Bickford-Smith’s distinctive, award-winning covers. Whether on a well-curated shelf or in your back pocket, these timeless works of philosophical, political, and psychological thought are absolute must-haves for book collectors as well as design enthusiasts.

A philosophy that saw self-possession as the key to an existence lived "in accordance with nature," Stoicism called for the restraint of animal instincts and the severing of emotional ties. These beliefs were formulated by the Athenian followers of Zeno in the fourth century BC, but it was in Seneca that the Stoics found their most eloquent advocate. Stoicism, as expressed in the Letters, helped ease pagan Rome's transition to Christianity, for it upholds upright ethical ideals and extols virtuous living, as well as expressing disgust for the harsh treatment of slaves and the inhumane slaughter witnessed in the Roman arenas. Seneca's major contribution to a seemingly unsympathetic creed was to transform it into a powerfully moving and inspiring declaration of the dignity of the individual mind. Robin Campbell's distinguished translation captures Seneca's humour and concise, memorable aphorisms and his introduction discusses the tensions between Seneca's philosophy and his turbulent career as adviser to the tyrannical emperor Nero.

For more than sixty-five years, Penguin has been the leading publisher of classic literature in the English-speaking world. With more than 1,500 titles, Penguin Classics represents a global bookshelf of the best works throughout history and across genres and disciplines. Readers trust the series to provide authoritative texts enhanced by introductions and notes by distinguished scholars and contemporary authors, as well as up-to-date translations by award-winning translators.

Lucius Annaeus Seneca, statesman, philosopher, advocate and man of letters, was born at Cordoba in Spain around 4 BCE. He rose to prominence in Rome, pursuing a career in the courts and political life, for which he had been trained, while also acquiring celebrity as an author of tragedies and essays. Falling foul of successive emperors (Caligula in 39 CE and Claudius in 41 CE), he spent eight years in exile, allegedly for an affair with Caligula’s sister. Recalled in 49 CE, he was made praetor and was appointed tutor to the boy who was to become, in 54 CE, the emperor Nero. On Nero’s succession, Seneca acted for some eight years as an unofficial chief minister. The early part of this reign was remembered as a period of sound government, for which the main credit seems due to Seneca. His control over Nero declined as enemies turned the emperor against him with representations that his popularity made him a danger, or with accusations of immorality or excessive wealth. Retiring from public life he devoted his last three years to philosophy and writing, particularly the Letters to Lucilius. In 65 CE following the discovery of a plot against the emperor, in which he was thought to be implicated, he and many others were compelled by Nero to commit suicide. His fame as an essayist and dramatist lasted until two or three centuries ago, when he passed into literary oblivion, from which the twentieth century has seen a considerable and immensely valuable recovery.

Robin Campbell is a well-known translator.