A Tale of Time City (Paperback) 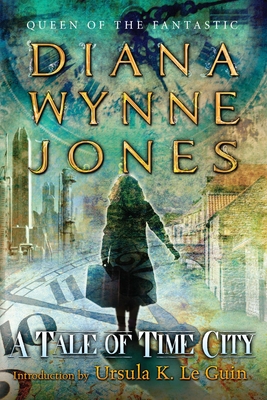 A  thrilling story by the legendary Diana Wynne Jones—with an introduction by Ursula K. Le Guin.

London, 1939. Vivian Smith thinks she is being evacuated to the countryside, because of the war. But she is being kidnapped - out of her own time. Her kidnappers are Jonathan and Sam, two boys her own age, from a place called Time City, designed especially to oversee history. But now history is going critical, and Jonathan and Sam are convinced that Time City's impending doom can only be averted by a twentieth-century girl named Vivian Smith. Too bad they have the wrong girl. . . .

Diana Wynne Jones was the multiple award-winning author of many fantasy novels for children, teenagers, and adults. Her book Howl's Moving Castle was made into an Academy Award-nominated major animated feature by Hayao Miyazaki. She received the World Fantasy Lifetime Achievement Award in 2007. Married to the medievalist J. A. Burrow, with whom she had three sons, she lived for many years in Bristol, the setting for many of her books. Diana Wynne Jones passed away in March 2011, after a long illness.

Ursula K. Le Guin is the revered author of Tales from Earthsea.

"Jones (author of Howl's Moving Castle and Warlock at the Wheel) has written a powerfully moving story about children who are, quite literally, racing through time to save their world."—Publishers Weekly

"Diana Wynne Jones, regarded as one of Britain's premier fantasy writers for young people, has produced another fascinating work of science fiction and adventure, brought to you by cast of truly unique and amusing characters."—Children's Literature