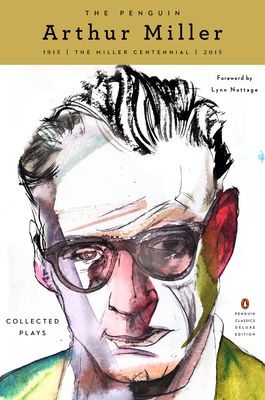 To celebrate the centennial of his birth, the collected plays of America’s greatest twentieth-century dramatist in a Penguin Classics Deluxe Edition

In the history of postwar American art and politics, Arthur Miller casts a long shadow as a playwright of stunning range and power whose works held up a mirror to America and its shifting values. The Penguin Arthur Miller celebrates Miller’s creative and intellectual legacy by bringing together the breadth of his plays, which span the decades from the 1930s to the new millennium. From his quiet debut, The Man Who Had All the Luck, and All My Sons, the follow-up that established him as a major talent, to career hallmarks like The Crucible and Death of a Salesman, and later works like Mr. Peters’ Connections and Resurrection Blues, the range and courage of Miller’s moral and artistic vision are here on full display.

Including eighteen plays—some known by all and others that will come as discoveries to many readers—The Penguin Arthur Miller is a collectible treasure for fans of Miller’s drama and an indispensable resource for students of the theatre.

The Penguin Arthur Miller includes: The Man Who Had All the Luck, All My Sons, Death of a Salesman, An Enemy of the People, The Crucible, A View from the Bridge, After the Fall, Incident at Vichy, The Price, The Creation of the World and Other Business, The Archbishop’s Ceiling, The American Clock, Playing for Time, The Ride Down Mt. Morgan, The Last Yankee, Broken Glass, Mr. Peters’ Connections, and Resurrection Blues.

For more than sixty-five years, Penguin has been the leading publisher of classic literature in the English-speaking world. With more than 1,500 titles, Penguin Classics represents a global bookshelf of the best works throughout history and across genres and disciplines. Readers trust the series to provide authoritative texts enhanced by introductions and notes by distinguished scholars and contemporary authors, as well as up-to-date translations by award-winning translators.

Arthur Miller (1915–2005) was born in New York City and studied at the University of Michigan. His remarkable creative output includes plays, fiction, memoir, and screenplays. Among other honors, he received the Pulitzer Prize for Drama and the John F. Kennedy Lifetime Achievement Award.

“Here we find the true compassion and catharsis that are as essential to our society as water and fire and babies and air. I remember walking and running and jumping out of the theater after seeing Death of a Salesman, like a child in the morning, because Miller awakened in me the taste for all that must be—the empathy and love for the least of us, out of which bursts a gratitude for the poetry of these characters and the greatness of their creator.”
—Philip Seymour Hoffman

“His plays and his conscience are a cold burning force.”
—Edward Albee

“[Death of a Salesman] was our story that we did not know until we heard it.”
—David Mamet

“Arthur Miller is a playwright for all seasons and all nations.”
—Christopher Bigsby

"The greatest playwright of the 20th Century."
—Vaclav Havel

"Writing meant, for him, an effort to locate in the human species a counterforce to the randomness of victimisation."
—Salman Rushdie

"He was so honest and a man of rare integrity in his writing."
—Harold Pinter

"Arthur was the last of the three great theatrical voices of the American century - O'Neill, Williams, Miller."
—David Hare

"[Miller] has looked with compassion into the hearts of some ordinary Americans and quietly transferred their hope and anguish to the theatre."
—Brooks Atkinson