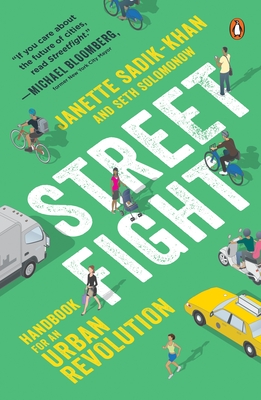 Like a modern-day Jane Jacobs, Janette Sadik-Khan transformed New York City's streets to make room for pedestrians, cyclists, buses, and green spaces. Describing the battles she fought to enact change, Streetfight imparts wisdom and practical advice that other cities can follow to make their own streets safer and more vibrant.

As New York City’s transportation commissioner, Janette Sadik-Khan managed the seemingly impossible and transformed the streets of one of the world’s greatest, toughest cities into dynamic spaces safe for pedestrians and cyclists. Her approach was dramatic and effective: Simply painting a part of the street to make it into a plaza or bus lane not only made the street safer, but it also lessened congestion and increased foot traffic, which improved the bottom line of businesses. Real-life experience confirmed that if you know how to read the street, you can make it function better by not totally reconstructing it but by reallocating the space that’s already there.

Breaking the street into its component parts, Streetfight demonstrates, with step-by-step visuals, how to rewrite the underlying “source code” of a street, with pointers on how to add protected bike paths, improve crosswalk space, and provide visual cues to reduce speeding. Achieving such a radical overhaul wasn’t easy, and Streetfight pulls back the curtain on the battles Sadik-Khan won to make her approach work. She includes examples of how this new way to read the streets has already made its way around the world, from pocket parks in Mexico City and Los Angeles to more pedestrian-friendly streets in Auckland and Buenos Aires, and innovative bike-lane designs and plazas in Austin, Indianapolis, and San Francisco. Many are inspired by the changes taking place in New York City and are based on the same techniques. Streetfight deconstructs, reassembles, and reinvents the street, inviting readers to see it in ways they never imagined.

Janette Sadik-Khan is one of the world’s foremost authorities on transportation and urban transformation. She served as New York City’s transportation commissioner from 2007 to 2013 under Mayor Michael Bloomberg, overseeing historic changes to New York City’s streets—closing Broadway to cars in Times Square, building nearly 400 miles of bike lanes, and creating more than 60 plazas citywide. A founding principal with Bloomberg Associates, she works with mayors around the world to reimagine and redesign their cities. She chairs the National Association of Transportation Officials, implementing new people-focused street design standards that have been adopted in 45 cities across the continent. She lives in New York City.

Seth Solomonow is a manager with Bloomberg Associates. He was the chief media strategist for Janette Sadik-Khan and New York City’s transportation department under Mayor Michael Bloomberg. A graduate of Columbia University Graduate School of Journalism, Solomonow has written for The New York Times and his hometown newspaper, The Staten Island Advance. He lives in Brooklyn, New York.

"No one has done more in less time to rewrite the future of New York’s streets."—Reclaim

“An inspiring read… The sort of book that should be read by every officeholder…But it is also a read for the rest of us. Anyone whose memory is longer than a New York minute who can remember when New York wasn't the pedestrian and bike friendly envy of cities the world over.”
—The Huffington Post

“Janette Sadik-Khan is like the child that Robert Moses and Jane Jacobs never had: an urban visionary determined to reshape the streets of New York, but with an abiding concern for the health of neighborhoods and the safety of their residents. If you care about the future of cities, read Streetfight.”
—Michael Bloomberg, former New York City Mayor

“Cities are where innovation, creativity and the unexpected happens, and Janette has helped make ours, New York City, safer, more livable and more profitable all at once. I watched these exciting changes happen, but the really interesting part is how she managed to implement these changes quickly and cheaply. That’s where other cities can use this as a manual for change on issues like health reform, education and the arts. This, then, is not just a book about transportation.”
—David Byrne, musician, artist

“This book is an urban epic as audacious as the changes Janette Sadik-Khan made to the map of New York City. She is a superhero for cities and an inspiration that streets built to human scale aren’t impossible, but merely awaiting those who dare.”
—Jan Gehl, Urbanist, architect, author

“To create safe and inclusive cities, being a visionary is not enough. You must also be an advocate, a communicator, a doer and, perhaps most importantly, a street fighter. Janette is that person and this is a book that provides the proof of the possible for citizens and their elected leaders everywhere.”
—Enrique Peñalosa, Mayor of Bogota

"Sadik-Khan's work will serve as a guidebook to city planners and traffic engineers everywhere, and motivate disenchanted urban dwellers to urge local politicians to make their cities more liveable."
—Booklist

“If [Robert] Moses had owned a pink fingernail of [Sadik-Khan’s] beguilement, he might have scored a bridge across the Atlantic.”
—Esquire

“[Sadik-Khan is] an urban visionary who cuts through the gridlock.”
—Slate

“This is a feel-great read for those of us who love cities, especially as pedestrians and bicyclists. Along with local efforts, the book contains wonderful examples of national and global reclamation projects. The good news comes in daily as examples of successful street rebalancing projects continue to mount from all over the world, and advocacy groups that push for these changes grow and strengthen. . . . Fortunately for all of us, [Sadik-Khan] was wildly successful.”
—UrbDeZine San Francisco