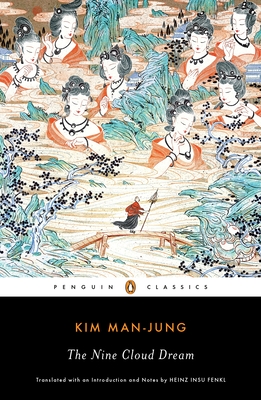 *Named one of the year's most anticipated books by The New York Times, The Millions, and i09*

Often considered the highest achievement in Korean fiction, The Nine Cloud Dream poses the question: Will the life we dream of truly make us happy? Written in 17th-century Korea, this classic novel’s wondrous story begins when a young monk living on a sacred Lotus Peak in China succumbs to the temptation of eight fairy maidens. For doubting his master’s Buddhist teachings, the monk is forced to endure a strange punishment: reincarnation as the most ideal of men.

On his journey through this new life full of material, martial, and sensual accomplishments beyond his wildest dreams, he encounters the eight fairies in human form, each one furthering his path towards understanding the fleeting value of his good fortune. As his successes grow, he comes closer and closer to finally comprehending the fundamental truths of the Buddha’s teachings. Like Hesse’s Siddhartha, The Nine Cloud Dream is an unforgettable tale that explores the meaning of a good life and the virtue of living simply with mindfulness.

Heinz Insu Fenkl is a writer, editor, translator, and folklorist. His first novel, Memories of My Ghost Brother, was a PEN/Hemingway finalist. He is an associate professor of English at SUNY New Paltz. He also serves on the editorial board of Azalea: Journal of Korean Literature and Culture, and is a consulting editor for Words Without Borders. His fiction has been published in The New Yorker, and his story collection, Skull Water, is forthcoming from Graywolf Press.

Kim Man-Jung (1637–1692) is generally accepted as the author of The Nine Cloud Dream (Kuunmong), often considered the greatest classic Korean novel. He is said to have composed it in exile as a comfort to his mother. A member of the yangban (ruling class) literati, Kim Man-Jung rose to become the head of the Confucian Academy. His other works include The Record of Lady Sa’s Journey South (Sassi Namjeongg).

“Man-Jung’s tale is a hypnotic journey, a scholarly, instructive Buddhist bildungsroman set across Tang dynasty China, and in Insu Fenkl’s skilled translation, a glimpse into the rich crossroads of religions and society therein.”—Publishers Weekly