In the Country of Others: A Novel (Hardcover) 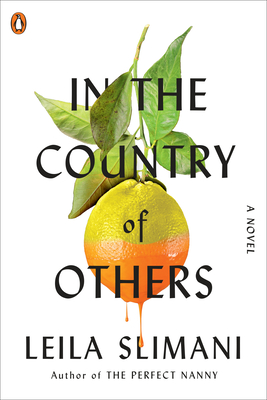 The award-winning, #1 internationally bestselling new novel by the author of The Perfect Nanny, about a woman in an interracial marriage whose fierce desire for autonomy parallels her adopted country's fight for independence

The world of men is just like the world of botany. In the end, one species dominates another. One day, the orange will win out over the lemon, or vice versa, and the tree will once again produce fruit that people can eat.

In her first new novel since The Perfect Nanny launched her onto the world stage and won her acclaim for her "devastatingly perceptive character studies" (The New York Times Book Review), Leila Slimani draws on her own family's inspiring story for the first volume in a planned trilogy about race, resilience, and women's empowerment.

Mathilde, a spirited young Frenchwoman, falls in love with Amine, a handsome Moroccan soldier in the French army during World War II. After the war, the couple settles in Morocco. While Amine tries to cultivate his family farm's rocky terrain, Mathilde feels her vitality sapped by the isolation, the harsh climate, the lack of money, and the mistrust she inspires as a foreigner. Left increasingly alone to raise her two children in a world whose rules she does not understand, and with her daughter taunted at school by rich French girls for her secondhand clothes and unruly hair, Mathilde goes from being reduced to a farmer's wife to defying the country's chauvinism and repressive social codes by offering medical services to the rural population.

As tensions mount between the Moroccans and the French colonists, Amine finds himself caught in the crossfire: in solidarity with his Moroccan workers yet also a landowner, despised by the French yet married to a Frenchwoman, and proud of his wife's resolve but ashamed by her refusal to be subjugated. All of them live in the country of others--especially the women, forced to live in the land of men--and with this novel, Leila Slimani issues the first salvo in their emancipation.

Leila Slimani is the bestselling author of The Perfect Nanny, one of The New York Times Book Review's 10 Best Books of 2018, for which she became the first Moroccan woman to win France's most prestigious literary prize, the Goncourt. Her first novel, Adèle, about a sex-addicted woman in Paris, won the La Mamounia Prize for the best book by a Moroccan author written in French and gave rise to her nonfiction book Sex and Lies: True Stories of Women's Intimate Lives in the Arab World. A journalist and frequent commentator on women's and human rights, Slimani spearheaded a campaign--for which she won the Simone de Beauvoir Prize for Women's Freedom--to help Moroccan women speak out, as self-declared outlaws, against their country's "unfair and obsolete laws." She is French president Emmanuel Macron's personal representative for the promotion of the French language and culture and was ranked #2 on Vanity Fair France's annual list of the Fifty Most Influential French People in the World. Born in Rabat, Morocco, in 1981, she now lives in Paris with her French husband and their two young children.

One of NPR’s Best Books of the Year

Longlisted for the Carnegie Medal for Excellence

“Slimani has made a career out of catching readers on the wrong foot with unsparing prose. . . . In the Country of Others is [her] most personal book yet.” —The New York Times

“Slimani writes motherhood like no one else. . . . [She] handles Mathilde’s evolution elegantly. . . . In Sam Taylor’s seamless, poetic translation, Slimani masterfully captures these nuanced shifts [among French, Alsatian, Arabic, and Berber]. . . . In the Country of Others . . . lays bare women’s intimate, lacerating experience of war and its consequent trauma.” ―The New York Times Book Review

“A beautifully written portrait of both a country and a family trying to establish their identities in the midst of immense turmoil.” ―NPR

“This one is so good.” ―NPR’s Pop Culture Happy Hour

“A satisfying if infuriating look at how power works in the struggle for independence, both personal and political. . . . Dynamic female characters dominate the book. . . . Slimani shines through the rise and fall of tension in her novels. Her willowy prose is dense with emotional depth and insight, and blunt observations elucidate every scene with force. . . . [Her] prose . . . is stunning.” ―The Boston Globe

“Slimani excels at telling this wide-ranging story, expertly folding themes of love, loss, alienation, gender, and belonging into a complex narrative set against the backdrop of World War II.” ―Vogue

“Wonderfully imagined . . . A compelling exploration of the past . . . [Slimani] works her dangerous magic on her own family history. . . . [She] has an instinct for whichever detail will deliver the strongest electric shock. . . . It will be fascinating to see how the rest [of the trilogy] unfolds.” ―Tessa Hadley, The Guardian

“A panoramic, ambitious tale . . . A big leap forward from an already established writer . . . It will leave anyone who reads it quietly thrilled at the thought of what its author might do next.” ―The Times (London)

“As wild and lush as a wildflower meadow . . . It will be fascinating to see what the next installment brings.” ―The Observer (London)

“Thrums with nervous energy . . . Slimani excels at evoking this time and place. Readers will end the first volume of the trilogy with high expectations for the next.” ―The Economist

“Slimani has never shied away from complicated aspects of human nature. . . . A story about the complexities of interracial marriage in the 1940s, womanhood in an intensely patriarchal society, and the Moroccan struggle for independence from French colonial rule.” ―The Cut

“A portrait of both a country and a family trying to establish their identities in the midst of immense turmoil.” ―NPR’s Code Switch

“Slimani is a doggedly unsentimental writer. . . . Even with its brutality, I felt compelled to keep reading and eagerly await the next book.” —Tomi Obaro, BuzzFeed

“A strikingly fresh and vivid novel, free of the stale affectation that permeates lesser historical fiction . . . [A] gripping novel whose personal struggles mirror those of Morocco’s fight for independence.” ―Observer (New York)

“[Slimani has] a genius for empathy, an ability to translate experiences, and an understanding of what’s important to leave in and what’s crucial to leave out. . . . Asking what it means to exist between cultures, and how we negotiate the ever-shifting complexities of privilege and identity, [In the Country of Others] acknowledges that such questions are as far from abstract as imaginable, and as intimate as the marriage bed.” ―The Millions

“The beautiful, evocative writing draws you in . . . and keeps you there until the last page.” ―Daily Express

“Powerful . . . Slimani creates an immersive and stunningly realized fictional world and ratchets up the tension as the novel moves toward its climax.” ―The Scotsman

“A multi-layered, nuanced book, with moments of humor and a lot to empathize with. I look forward to the next instalment.” ―Susannah Butter, Evening Standard

“The novel’s brilliance is in its unconventional portrayal of its characters’ contradictions, restlessness, uneasy alliances . . . Striking.” ―The Tablet (London)

“[A] sharp and nuanced critique of patriarchy . . . A novel of the heart concerning race and the struggle for personal and sexual freedom.” ―Literary Review

“The prose is so descriptive I can almost feel the scratch of the sand on my face. . . . An interesting and revealing book written with skill.” ―Sheila Grant, NB magazine

“The world of this novel―Morocco after World War II, leading up to the revolt against French colonialism―is beautifully created. Personal life, social life, everyday life spring vividly from the page, and we feel deeply for the family caught in the middle of the conflict of history. An exceptional, powerful novel from this justly celebrated writer.” ―Salman Rushdie

“Leila Slimani is a wonderful writer, and this gorgeous novel brings vibrantly to life the vanished world of 1950s Morocco, in a narrative at once richly layered and deceptively simple. I loved it and didn't want it to end.” ―Claire Messud

“A powerful and compelling family saga—about women and subjugation, otherness and belonging, and the often conflicting loyalty to both family and country—written with a deftness that has come to define Leila Slimani’s writing. It will no doubt resonate in the reader’s mind long after the final sentence is read.” ―Christine Mangan, bestselling author of Tangerine and Palace of the Drowned

“Dazzling―ambitious, stylish, deeply evocative, and with such clever and intimate characterization. A terrific achievement.” ―Emma Stonex, bestselling author of The Lamplighters

“Who better than Slimani to write a great contemporary novel from the perspective of both sides of the Mediterranean, a double heritage, that of the horrors of colonization and that of the pains of decolonization?” ―Vanity Fair (France)

“Written with breadth and a great power of evocation.” ―Libération

“A virtuoso story . . . The great decolonization novel we expected . . . Sensual, radiant, violent . . . [It] captivates us, makes us feel, touch, experience what a people, what a family could feel. The author shows a new mastery.” ―Les Inrockuptibles

“Fascinating . . . Slimani is like a filmmaker who knows how to place her camera to capture emotions close-up and action with wide angles.” ―Jeune Afrique

“Fluid and fiery . . . Rich in humanity . . . [A] fascinating family saga . . . From the first words, we are swept up in an atmosphere where all the emotions seem palpable. . . . Slimani is a wonderful storyteller.” ―Profession Spectacle

“Very inspired . . . [A] great fresco that mixes intimate tragedies and historical upheavals . . . Slimani is not done surprising us.” ―France Info

“Slimani is an astute observer of power politics in the home.” ―John Freeman, The Boston Globe

“A gifted stylist, Slimani can pack a sneaky wallop when she wants.” ―The Philadelphia Inquirer

“Slimani is a fearless writer who pulls back the curtain to show what secretly thrills and terrifies women.” ―Evening Standard

“[Slimani] writes with a cool detachment and unflinching emotional honesty that takes your breath away.” ―Vogue (U.K.)

“[Slimani] is now the archetype of a certain international image of a female French author: talented, open-minded, and politically engaged.” ―Vanity Fair (France), “The 50 Most Influential French People in the World”