The Eternal Decline and Fall of Rome: The History of a Dangerous Idea (Hardcover) 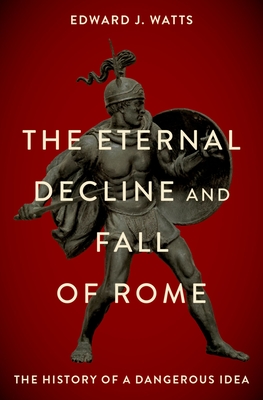 As this book intriguingly explores, for those who would make Rome great again and their victims, ideas of Roman decline and renewal have had a long and violent history. The decline of Rome has been a constant source of discussion for more than 2200 years. Everyone from American journalists in the twenty-first century AD to Roman politicians at the turn of the third century BC have used it as a tool to illustrate the negative consequences of changes in their world. Because Roman history is so long, it provides a buffet of ready-made stories of decline that can help develop the context around any snapshot. And Rome did, in fact, decline and, eventually, fall. An empire that once controlled all or part of more than 40 modern European, Asian, and African countries no longer exists. Roman prophets of decline were, ultimately, proven correct-a fact that makes their modern invocations all the more powerful. If it happened then, it could happen now. The Eternal Decline and Fall of Rome tells the stories of the people who built their political and literary careers around promises of Roman renewal as well as those of the victims they blamed for causing Rome's decline. Each chapter offers the historical context necessary to understand a moment or a series of moments in which Romans, aspiring Romans, and non--Romans used ideas of Roman decline and restoration to seize power and remake the world around them. The story begins during the Roman Republic just after 200 BC. It proceeds through the empire of Augustus and his successors, traces the Roman loss of much of western Europe in the fifth century AD, and then follows Roman history as it runs through the Eastern Roman Empire (Byzantium) until its fall in 1453. The final two chapters look at ideas of Roman decline and renewal from the fifteenth century until today. If Rome illustrates the profound danger of the rhetoric of decline, it also demonstrates the rehabilitative potential of a
rhetoric that focuses on collaborative restoration, a lesson of great relevance to our world today.

Edward J. Watts is Alkiviadis Vassiliadis Endowed Chair and Professor of History at the University of California, San Diego. His previous books include Mortal Republic: How Rome Fell into Tyranny, The Final Pagan Generation, and Hypatia: The Life and Legend of an Ancient Philosopher.