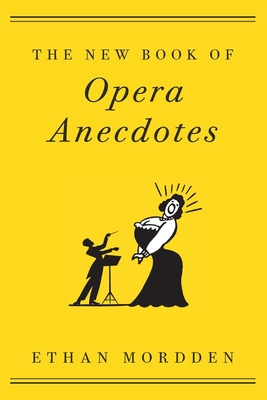 Building on the long-established success of Ethan Mordden's Opera Anecdotes, The New Book Of Opera Anecdotes continues where the original left off, bringing into view the new corps of major singers that arose after the first book's publication in 1985 -- artists such as Renee Fleming, Roberto Alagna, Deborah Voigt, Jonas Kaufmann, Kathleen Battle, and Jane Eaglen (who tested her family with Turandot's three riddles and got a very original answer). There are also fresh adventures with opera's fabled great -- Rossini, Wagner, Toscanini (whose temper tantrums are always good for a story), Franco Corelli, Luciano Pavarotti, Leontyne Price (who, when the Met's Rudolf Bing offered her the voice-killing role of Abigaille in Verdi's Nabucco, said, "Man, are you crazy?"). Almost all the stories in The New Book Of Opera Anecdotes are completely new, whether from the present or the past, taking in many historical developments, from the rise of the conductor to the appearance of the gymmed-up "bari-hunk" who refuses to play any role in which he can't appear shirtless. While most of Mordden's anecdotes are humorous, some are emotionally touching, such as one recounting a Met production of Mozart's The Marriage Of Figaro in which Renee Fleming sang alongside her own six-year-old daughter. Other tales are suspenseful, as when Tito Gobbi shows off his ability to make anyone turn around simply by staring at his or her back. He tries it on Nazi monster Joseph Goebbels, who does turn around, and then starts to move toward Gobbi, seething with rage, step by step... Mordden recounts these stories in his own unique voice, amplifying events for reading pleasure and adding in background material so the opera newcomer can play on the same field as the aficionado. Witty, dramatoic, and at times a little shocking, The New Book Of Opera Anecdotes will be a welcome addition to any opera fan's library.