The Harvest of Sorrow: Soviet Collectivization and the Terror-Famine (Paperback) 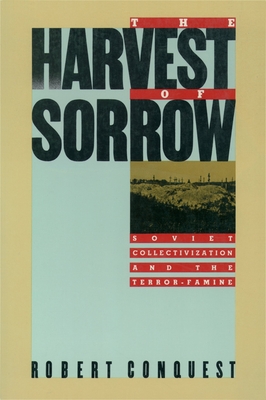 The Harvest of Sorrow is the first full history of one of the most horrendous human tragedies of the 20th century. Between 1929 and 1932 the Soviet Communist Party struck a double blow at the Russian peasantry: dekulakization, the dispossession and deportation of millions of peasant families,
and collectivization, the abolition of private ownership of land and the concentration of the remaining peasants in party-controlled collective farms. This was followed in 1932-33 by a terror-famine, inflicted by the State on the collectivized peasants of the Ukraine and certain other areas by
setting impossibly high grain quotas, removing every other source of food, and preventing help from outside--even from other areas of the Soviet Union--from reaching the starving populace. The death toll resulting from the actions described in this book was an estimated 14.5 million--more than the
total number of deaths for all countries in World War I. Ambitious, meticulously researched, and lucidly written, The Harvest of Sorrow is a deeply moving testament to those who died, and will register in the Western consciousness a sense of the dark side of this century's history.

Robert Conquest is Senior Research Fellow and Scholar-Curator of the East European Collection at the Hoover Institution, Stanford University. He is the author of numerous books on Soviet studies and has published poetry, criticism, and fiction.