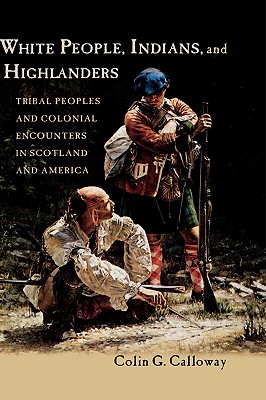 In nineteenth century paintings, the proud Indian warrior and the Scottish Highland chief appear in similar ways--colorful and wild, righteous and warlike, the last of their kind. Earlier accounts depict both as barbarians, lacking in culture and in need of civilization. By the nineteenth
century, intermarriage and cultural contact between the two--described during the Seven Years' War as cousins--was such that Cree, Mohawk, Cherokee, and Salish were often spoken with Gaelic accents. In this imaginative work of imperial and tribal history, Colin Calloway examines why these two seemingly wildly disparate groups appear to have so much in common. Both Highland clans and Native American societies underwent parallel experiences on the peripheries of Britain's empire, and often encountered one another on the frontier. Indeed, Highlanders and American Indians fought, traded, and lived together. Both groups were treated as tribal
peoples--remnants of a barbaric past--and eventually forced from their ancestral lands as their traditional food sources--cattle in the Highlands and bison on the Great Plains--were decimated to make way for livestock farming. In a familiar pattern, the cultures that conquered them would later
romanticize the very ways of life they had destroyed. White People, Indians, and Highlanders illustrates how these groups alternately resisted and accommodated the cultural and economic assault of colonialism, before their eventual dispossession during the Highland Clearances and Indian Removals. What emerges is a finely-drawn portrait of how
indigenous peoples with their own rich identities experienced cultural change, economic transformation, and demographic dislocation amidst the growing power of the British and American empires.