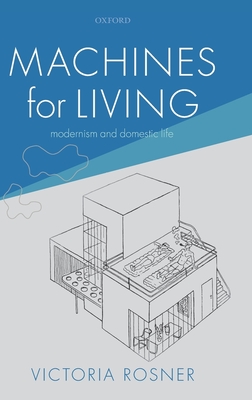 Changes in the routines of domestic life were among the most striking social phenomena of the period between the two World Wars, when the home came into focus as a problem to be solved: re-imagined, streamlined, electrified, and generally cleaned up. Modernist writers understood themselves to
be living in an epochal moment when the design and meaning of home life were reconceived. Moving among literature, architecture, design, science, and technology, Machines for Living shows how the modernization of the home led to profound changes in domestic life and relied on a set of emergent
concepts, including standardization, scientific method, functionalism, efficiency science, and others, that form the basis of literary modernism and stand at the confluence of modernism and modernity. Even as modernist writers criticized the expanding reach of modernization into the home, they drew on its conceptual vocabulary to develop both the thematic and formal commitments of literary modernism. Rosner's work develops a new methodology for interdisciplinary modernist studies and shows how
the reinvention of domestic life is central to modernist literature.

Victoria Rosner, Dean of Academic Affairs, School of General Studies, and Adjunct Associate Professor, Department of English and Comparative Literature, Columbia University Victoria Rosner is Dean of Academic Affairs at Columbia University School of General Studies and Adjunct Associate Professor in the Columbia University Department of English and Comparative Literature. Her scholarship focuses on modernist aesthetics across different forms of cultural production, aswell as life-writing and gender studies. Rosner is the author of Modernism and the Architecture of Private Life (Columbia UP, 2005), winner of the Modernist Studies Association Book Prize. She is also the editor of The Cambridge Companion to the Bloomsbury Group (Cambridge UP, 2014) and The Globaland the Intimate: Feminism in Our Time (Columbia UP, 2012; with Geraldine Pratt). With Nancy K. Miller, she edits the Gender and Culture book series for Columbia University Press. Her most recent project is the web-based archive Pioneering Women of American Architecture (with Mary McLeod).