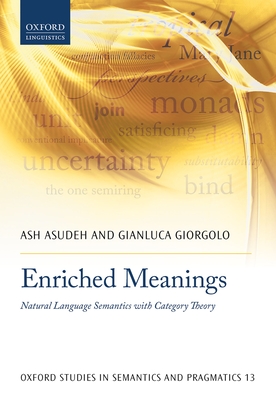 This book develops a theory of enriched meanings for natural language interpretation that uses the concept of monads and related ideas from category theory, a branch of mathematics that has been influential in theoretical computer science and elsewhere. Certain expressions that exhibit complex
effects at the semantics/pragmatics boundary live in an enriched meaning space, while others live in a more basic meaning space. These basic meanings are mapped to enriched meanings only when required compositionally, which avoids generalizing meanings to the worst case. Ash Asudeh and Gianluca
Giorgolo show that the monadic theory of enriched meanings offers a formally and computationally well-defined way to tackle important challenges at the semantics/pragmatics boundary. In particular, they develop innovative monadic analyses of three phenomena - conventional implicature, substitution
puzzles, and conjunction fallacies - and demonstrate that the compositional properties of monads model linguistic intuitions about these cases particularly well. The analyses are accompanied by exercises to aid understanding, and the computational tools used are available on the book's companion
website. The book also contains background chapters on enriched meanings and category theory. The volume is interdisciplinary in nature, with insights from semantics, pragmatics, philosophy of language, psychology, and computer science, and will appeal to graduate students and researchers from a
wide range of disciplines with an interest in natural language understanding and representation.

Ash Asudeh, Professor, Department of Linguistics, and Director of the Center for Language Sciences, University of Rochester, Gianluca Giorgolo, Independent Scholar Ash Asudeh is a Professor in the Department of Linguistics and the Director of the Center for Language Sciences at the University of Rochester. He has previously held positions at Carleton University and the University of Oxford. His research interests include syntax, semantics, pragmatics, languageand logic, and cognitive science. He has published extensively on the syntax-semantics interface, particularly in the frameworks of Lexical-Functional Grammar and Glue Semantics, and is the author of The Logic of Pronominal Resumption (OUP, 2012) and, with Joan Bresnan, Ida Toivonen, and StephenWechsler, of Lexical-Functional Syntax, 2nd ed (Wiley-Blackwell, 2016). Gianluca Giorgolo is an independent software engineer based in Modena, Italy. He was previously a Marie Curie Fellow at the University of Oxford, in the Faculty of Linguistics, Philology and Phonetics, a Research Associate at King's College London, and an ERA Postdoctoral Fellow at CarletonUniversity, in the Institute of Cognitive Science. His work has been published in journals such as Semantics and Pragmatics and in the proceedings of conferences on Lexical-Functional Grammar, semantics, and cognitive science