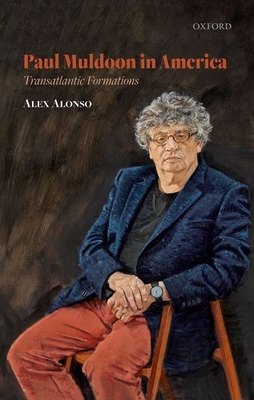 Paul Muldoon was looking west long before he left Ireland for the United States in 1987, and his Transatlantic departure would prove to be a turning point in his life and work. In America, Muldoon's creative repertoire has extended into song writing, libretti, and literary criticism, while his
poetry collections have extended to outlandish proportions, typified in recent years by a level of formal intensity that is unique in modern poetry. To leave Northern Ireland, though, is not necessarily to leave it behind. Muldoon has spoken of his 'sense of belonging to several places at once, ' and in the United States he has found another creative gear, new modes of performance facilitated by his Irish migr status. Focusing on the protean
work of his American period, this book explores Muldoon's expansive structural imagination, his investment in Eros and errors, the nimbleness of his allusive practice as both a reader and writer, and the mobility of his Transatlantic position. It raises questions about the Irish poet as a westward
voyager, about Irish-American cultural exchange, and how departures for Muldoon seem to be a precondition for return, indeed returns of many different kinds. It also draws on archival research to produce provocative new readings of Muldoon's later works. Exploring the poetic and literary-critical
'long forms' that are now his hallmark, this volume places the most significant works of Muldoon's American period under the microscope, and opens up the intricate formal schemes of a poet Mick Imlah credits as having 'reinvented the possibilities of rhyme for our time.'

Alex Alonso, Government of Ireland Postdoctoral Fellow, Trinity College Dublin Alex Alonso is Government of Ireland Postdoctoral Fellow at Trinity College Dublin. He completed his doctoral thesis at the University of York in 2017. He has essays published or forthcoming in Essays in Criticism, Victorian Poetry, and A Companion to Contemporary British and Irish Literature(Wiley-Blackwell), and is the British Poetry Post-1950 reviewer for The Year's Work in English Studies. He was editor of the York-based poetry magazine Eborakon in 2016.