Awakening to China's Rise: European Foreign and Security Policies Toward the People's Republic of China (Hardcover) 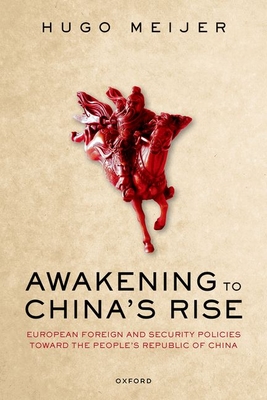 Awakening to China's Rise provides the most comprehensive analysis to date of how Europe's major powers have responded to the re-emergence of China as a great power in world politics since the end of the Cold War. To do so, it puts forward a unique cross-regional comparison of how the major
European powers (France, Germany and the United Kingdom) have confronted Chinese assertiveness both in the Asia-Pacific and in Europe. Firstly, it analyses their response to China's increasingly muscular regional posture in the Asia-Pacific through the development of diplomatic and security
initiatives with partners in the region. Secondly, it delineates how they have confronted China's inroads into Europe, looking at the measures that they have taken to tackle Chinese investments in, and supply of, technologies in strategic sectors such as critical national infrastructures, dual-use
technologies, and in the digital domain, including Huawei's 5G networks. A longstanding assumption in the IR literature has been that European foreign policies toward the People's Republic of China have been driven by a 'na ve' and self-interested focus on the economic opportunities presented by
such a vast market, overlooking security considerations. This book challenges such common belief through a detailed examination of the policies of France, Germany and the United Kingdom from 1989 to the present. Its central argument is that, whereas this assessment aptly characterized the first two
post-Cold War decades, Beijing's growing assertiveness after 2009 caused the three major European powers to awaken to China's rise. In the 2010s, heightened threat perceptions of China, coupled with increasingly competitive bilateral economic relations with the PRC, have gradually and cumulatively
caused the hardening of their policy goals which, in turn, translated into the formulation of new policy instruments to confront such a challenge. To substantiate this argument, the book relies on a large body of previously undisclosed primary sources, including: 223 interviews conducted with senior
officials in Europe (Berlin, Brussels, London, Paris), in the United States (Washington DC), and in Asia (Beijing, Shanghai, New Delhi, Seoul); declassified archival documents from France, the UK and Germany; leaked US diplomatic cables; and new data on European naval deployments.

Hugo Meijer is CNRS Research Fellow at Sciences Po, Center for International Studies (CERI) and the Founding Director of the European Initiative for Security Studies (EISS), a pan-European multidisciplinary network of scholars that share the goal of consolidating security studies in Europe. He isalso Senior Research Fellow at the Centre for Security, Diplomacy and Strategy (CSDS) at the Brussels School of Governance, and Honorary Researcher at the Centre for War and Diplomacy, Lancaster University. Previously, he was Marie Sklodowska-Curie Fellow at the European University Institute (EUI, Florence), Lecturer in Defence Studies at King's College London, and a Researcher at the Institute for Strategic Research (IRSEM, Paris).