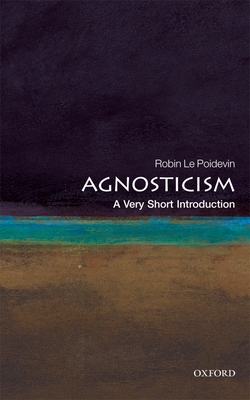 What is agnosticism? Is it a belief, or merely the absence of belief? Is it the result of too little thought about an issue--or too much? Who were the first to call themselves agnostics? Does agnosticism deserve serious consideration today? Can an agnostic live a religious life? What place should agnosticism have in education? These are just some of the questions that Robin Le Poidevin considers in this Very Short Introduction, as he sets the philosophical case for agnosticism and explores it as a historical and cultural phenomenon. Agnosticism emerges here as a much more sophisticated, and much more interesting, attitude than a simple failure to either commit to, or reject, religious belief. Le Poidevin challenges the common wisdom about agnosticism among both believers and atheists, and invites the reader to rethink their own position on the issues. Indeed, in arguing in favor of agnosticism as a respectable position to take, this stimulating and provocative guide takes issue on many points with the assertions of prominent atheists such as Richard Dawkins.

Robin Le Poidevin is Professor Metaphysics at Leeds University. In 2007 he gave the Stanton Lectures in the Philosophy of Religion at Cambridge.