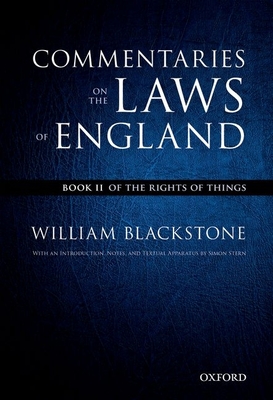 Oxford's variorum edition of William Blackstone's seminal treatise on the common law of England and Wales offers the definitive account of the Commentaries' development in a modern format. For the first time it is possible to trace the evolution of English law and Blackstone's thought through
the eight editions of Blackstone's lifetime, and the authorial corrections of the posthumous ninth edition. Introductions by the general editor and the volume editors set the Commentaries in their historical context, examining Blackstone's distinctive view of the common law, and editorial notes
throughout the four volumes assist the modern reader in understanding this key text in the Anglo-American common law tradition. Property law is the subject of Book II, the second and longest volume of Blackstone's Commentaries. His lucid exposition covers feudalism and its history, real estate and the forms of tenure that a land-owner may have, and personal property, including the new kinds of intangible property that were
developing in Blackstone's era, such as negotiable instruments and intellectual property.

William Blackstone Sir William Blackstone (1723-1780) was a prominent public figure in the eighteenth century. Judge and jurist, barrister and politician, his work has had a profound influence on the Anglo-American legal tradition. The first Vinerian Professor of English Law, Blackstone was a Justice of the Court ofCommon Pleas at the time of his death. The Commentaries published in eight editions in his lifetime, and a posthumous ninth edition in 1783. Simon Stern teaches law and English at the University of Toronto. His publications include articles and book chapters on various aspects of Anglo-American legal and literary history in the eighteenth and nineteenth centuries, including intellectual property, obscenity, search and seizure, andcriminal law. His current research examines the history and theory of legal fictions.